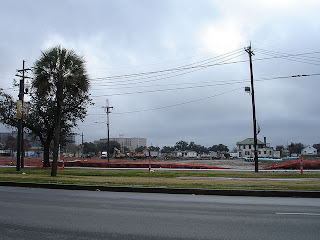 I was going to name this post “All the things we could do with all the land we cleared in the middle of the city for a hospital that only needs half of the size.” That wouldn’t be right to do at this time because maybe the original plan from LSU gets done. I highly doubt that at this point because it looks like Tulane, David Vitter, and the shadow government have stepped in and found a way to get their share of the money with the governor’s blessing. It’s amazing how the governor can change his mind about certain topics depending on who’s in opposition to his original opinion. None of this is surprising to me.
Somehow we took a plan that was going to transform the city and create so many jobs and turned it into buying all of Tulane’s old hospital buildings and one of them isn’t even in the city. What happened to all the push to have everything being new? If that’s the case we could have just fixed all the old hospital buildings around the city and had them opened by now.
I don’t have the energy to be worried about things the state and shadow government does. Their agenda has been apparent since the storm. All you have to do is drive around and see that. I am disappointed with the city’s leadership for getting caught up in the middle of struggle between powerbrokers over money. I don’t think a house should have been moved, or a building torn down before there was a concrete plan in place. We could have waited and just cleared whatever space was needed after Tulane got their cut of the money and we knew what was going to be built. It wouldn’t have taken long to clear that space. All we do is tear down buildings in this city. We are getting as good at that as we are at jazz and fighting.
Posted by Clifton at 6/15/2011 10:01:00 AM