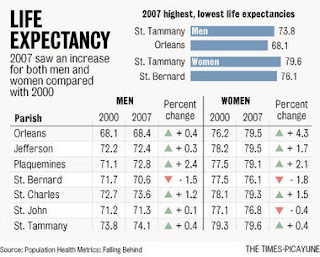 According to an article on the front page of the Times Picayune this morning, men in New Orleans have one of the lowest life expectancies in the country. We needed one more thing to worry about. I guess if we need a silver lining we can take pride in the fact that we don’t have the lowest life expectancy. That title goes to Holmes County, Mississippi. I don’t know what’s going on around there but I won’t be heading that way if we have to evacuate for a storm. I got enough trouble.
While we are living to an average of 68 years our women are living to an average of 79 years old. That means that not only will we only get to enjoy a few years of retirement but our women will be using the rest of our money to have fun and meet guys who are still living at bingo games. This might be the first thing that makes me support raising the retirement age to 70.
If they raise it and the averages hold up I can probably work until I pass out from a combination of stress, pickled pork, brown liquor and Zatarain’s Crab Boil seasoning. I’ll be headed to the big BBQ in the sky with all my boys who didn’t go to the doctor. It’s sad to admit but we don’t really start cutting back on things until they have already made us sick. If we cut back a little and pay more attention I know we can add at two years on the average and get us up to 70.
There will never be a more authentic New Orleans man as my grandfather was. He was made of this city in and out and he lived to be 89. It’s not like he was a health nut or anything either because in his heyday because his close friends and associates called him “Heavy”. I think if was still here now and I asked him about this article he would probably say that to way to live a long time is to try and relax as much as you can when you are not working, start going to the doctor for checkups or when things don’t feel right, and by all means avoid being hit by bullets.
I think if we start going to the doctor and being more responsible while the youngsters avoid bullets and start living longer we can push our average to 75 and actually be around to enjoy our retirement. If we just keep eating and drinking everything without moderation and the bullets keep flying we will be giving Holmes County a run for the top spot and once again be at the wrong end of another list.
Posted by Clifton at 6/20/2011 08:01:00 PM

Black Friday In united States : Black Friday is the day after Thanksgiving in the USA and falls on the Friday after the fourth Thursday in November.

Ferrari Girls in Indonesia : Beauties in the eyes of Andrew Macpherson, It’s not shocking when celebrities get divorced, and by the minute it seems. At the current divorce rate, including non-celebrities, you’d think it was in style.

Largest Gathering of Superheroes : Funnyman Will Ferrell has the title role in DreamWorks new animated comedy “Megamind,” and to promote his new film, Ferrell and over 1,580 costumed superheroes gathered together over the weekend on October 2, 2010 at Staples Center in Los Angeles in an effort to break the world record for the largest gathering of superheroes.

Record Holders of Plastic Surgery : A lot of pictures of celebrities when they were young, before they were famous.

Expensive Bikes in The World : Here’s a list of most expensive bikes in the world. These bikes is becoming expensive because of the material use or complexities of the creation.

Hit the Road With Your Mobile Disco : The modern technology has made it possible for the innovative designers to make a product smaller, portable and mobile.

Musical Beach Towel Creates a Racket : The young music lovers want their music everywhere all the time and they want it loud.

the Hot Destination for Bachelor Parties : Bachelor parties have evolved over the years. It used to be rather simple and predictable. The friends of the groom got together in a pub or night club and got wasted.

Top 10 Most Anticipated Movies 2010 : Year changes, dozens of movies have enjoyed box office in 2009. However, You should prepare a calendar to mark some decent movies to be anticipated in 2010.

it's been my experiance that the old guys in my life that broke all the rules and still lived to a ripe old age were skinny and had a gig in their youth that made them work their ass off.

hardcore extreme labor in the heat of new orleans.

as a cook i got one factor.

hopeing i get to split the diff. at the end of the road.

i swear ima going on that diet for lent next year.

it's been my experiance that the old guys in my life that broke all the rules and still lived to a ripe old age were skinny and had a gig in their youth that made them work their ass off.

hardcore extreme labor in the heat of new orleans.

as a cook i got one factor.

hopeing i get to split the diff. at the end of the road.

i swear ima going on that diet for lent next year.

What's up Rick,
I'm hoping I don't get to try the extreme hardcore labor approach anytime soon but I think you're right.