There are Two Sets of Rules 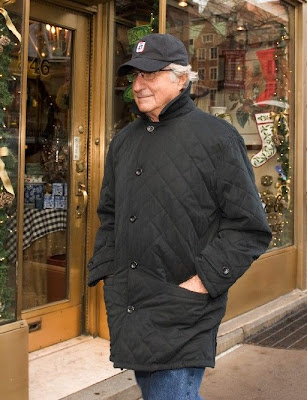 A few weeks ago Plaxico Burress shot himself in the leg at a club. The next day there was a picture of him all over the world being led away in handcuffs like he kidnapped and harmed a small child. I remember when the mayor of my city first got elected and he and his right hand woman, Kimberly Williamson Butler, were going to rid the city of corruption by stopping people from getting break tags and taxi cab permits. They made a sweep and paraded those brothers and sisters into Central Lockup like members of Al Qaeda (This was before the big reversal when black people were upset with Ray Nagin and all the white people loved him). When Kwame Kilpatrick got caught up in , the media couldn’t wait to show him being put in handcuffs on his way to jail. There are too many other instances of this in the news to count.

Last night out of curiosity I searched the name Bernard Madoff. I used a few different search engines, just to be sure. The picture at the top of this post is all I could find in relation to his crimes. He’s headed back to his apartment after court. He doesn’t appear to be the man that single handedly destroyed thousands of people’s lives. He actually looks pretty content with himself. I don’t see any police officers or handcuffs. Where are the pictures of him unshaven wearing an orange jumpsuit at his hearing? There’s no angry mob standing nearby shouting angry hateful things to him like they did Michael Vick. Here is a man that stole so much money entire organizations have had to shut down because they are broke. Some small cities lost their pension funds for teachers, police, and firemen. Hard working people lost their retirement. Yet, there is not one picture anywhere of him even looking like the criminal he is. I’m willing to bet that he won’t spend a day in jail; and if he does, there won’t be any footage of him in shackles getting on the bus to Riker’s .

That’s how Americans get themselves played by people in power. If Bernard Madoff and I got on an elevator with an older white lady, she would probably move closer to his side since he's supposed to be less threatening. If she did I wouldn’t take it personal because I know where it comes from. People like me are shown on television all the time in handcuffs and mug shots for the wrongs they have done. Meanwhile, the guy she’s moving closer to could probably be squandering her life savings and her kid’s college fund and she has no worries at all about him. Frankly, the media is quite comfortable playing into this double standard because it helps the general public validate their incorrect stereotypes of a certain group of people.

By no means am I excusing anything Plaxico Burress, Kwame Kilpatrick, or anything else that a black man has done to end up on the news. I believe in self accountability and we as black men need to start making better decisions. However, the lives Madoff ruined makes anything a football player or a text messenging mayor did pale in comparison. The coverage of the crime should match the severity, no matter what the person looks like; and this guy deserves to be treated just as harshly as O.J. Simpson.

He should be treated worse! This justice system definetly isn't fair! No matter what O.J. did for the rest of his life he would be under scrutiny. Many don't understand the view point you have expressed. Vick needs to be released and Madoff jailed immediately! It goes to show you that animals have a higher value than people losing money. We live in a crazy world where we will never be treated equally no matter the crime. We are the same and should be treated equally no matter the color, sex or CRIME!

"I believe in self accountability and we as black men need to start making better decisions. However, the lives Madoff ruined makes anything a football player or a text messenging mayor did pale in comparison. The coverage of the crime should match the severity, no matter what the person looks like; and this guy deserves to be treated just as harshly as O.J. Simpson."

And you're never going to convince some kid that it doesn't make $20 to sell rock on some corner when he watches the news and sees people make $20 million for breaking bigger laws -- and have no one care.

So, yeah, I don't care if a kid is punished if he jacks some old lady for her purse; he deserves it. But what does a man who jacks thousands of old ladies for their purses deserve? Let's get real.

What, the correction of the crack/powder cocaine sentencing difference wasn't enough for you people?

Thanks for writing exactly what this (formerly) upper middle class white guy (well, I'm still a white guy) was thinking. I work in the criminal justice system and see dumb shits who get busted on their fourth purse snatching literally go away for life, but this guy doen'st have a bajillion dollar bond? Uh, he has means to run to Brazil, you know.

If it's any consolation, these guys are also a lot more likely to off themselves rather than go to prison or face the shame at the country club.

Also, a little known fact is that (if you believe them) he ripped off his own kids. Classy guy.

Cliff, that's truth. The media will ALWAYS play into this, after all diversion has been so effective, keeps the masses distracted just long enough so they can "work".

I don't know that I totally agree with this. Plax had a loaded gun in a city where its well known the consequences for this. If you carry a loaded gun, it must be presumed you're willing to use this gun. This is a different type of crime than fraud. Plax is also a very high profile person in the sports world and Madorff would be an unknown to the average american. Theres definatly a disparity between so called white and blue collar crimes, but I think the examples provided in this blog are poor ones.

The point of this post was to show how the media handles stories about criminal behavior differently for certain groups of people. I would have loved to find a crime done by a black man that is parallel with Mr. Madoff did but I couldn't think of any black man that could steal 50 billion dollars from the public. Since the media never treats any accused black man with the same respect they are showing Mr. Madoff any example I use fits in my opinion.

Cliff, truer words have never been spoken.
By the way, Merry Christmas. You have a great blog.

Mainstream coverage of black male athletes that make poor choices is absolutely insane. The Plax story was a total feeding frenzy. Just one year prior there was a whole slate of stories in the aftermath of the Sean Taylor slaying about how athletes were targets and needed to find ways to protect themselves.

Bernard Madoff perpetrated a fraud of historic proportions, one that is sending ripple effects throughout the world economy, and he's allowed to stay in the comfort of his own home.

There has long been a double standard, not just with the way the media covers black crime vs white crime.

That said, there has also been a double standard with the way the media portrays street crime compared to how they cover white collar crime. Part of it is tied into racial and economic stereotypes. But another part of it is the media's inability to communicate the severity of certain crimes to the lay reader. It's easy for the media to crap out a "man kills man" story than it is to truly flesh out a "man engineers global fraud scheme to defraud philanthropic organizations" story.

As usual you nailed the truth.

The Madoff suicide's have begun, Sad but true an investor has committed suicide due to losing 1.4million. People really think Madoff should be free? Here is a man that was not mentally free, overwhelmed with the scrutiny he was about to face because of investing with this Crook. Madoff needs to get well over the sentence they gave O.J. I'm sorry if nobody sees the injustice of some crimes in this world. It makes me upset that someone can't see the comparison's.

P.S. after the recent attacks on athletes I don't BLAME Plaxixo for carrying a gun. Many everyday non-criminal people have a gun for protection.

The saddest part about this is that we as people buy the hype. Madoff is the gentle thief and O.J. is the boogie man. We wont see Madoff's trial on tv, his sentencing will not be breaking news. It will be a passing story in the headlines. But we will be bombarded with images of brown men in handcuffs and in police cars. This is the prime example that it is way past time for us control our own image and hold the media accountable for their "unbiased" coverage of these events. If we don't then we can't blame the media, we can only blame ourselves.