Red is Right......This Ain't For Everybody 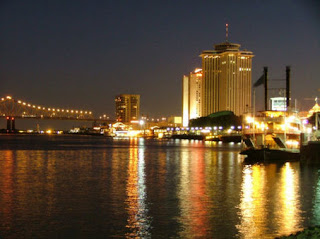 I'm posting this blog from Big Red Cotton because she said everything that needed to be said about this and I agree 100%. I would just like to add that what she said should go double for the people who live here now and have the same negative attitude about the city. At least the people in this survey are going by what they see in the media. If you are here everyday and don't know how you wake up in the morning when you have to deal with this city, please leave. I would rather have 300,000 people with civic pride without the extra ones who exist just to remind me of all the problems we have. You all make me sick. Allow me to give Red the spotlight.

New Orleans - It Aint For Everybody

Okay, so a soon-to-be released survey identifies the 20 cities Americans say they would most want - and least want - to relocate for a job.

Because the national economy is in the crapper into the unforeseeable future, more Americans will be faced with having to relocate to find work. So this Washington-based professionals organization, The Human Capital Institute, created a survey to help cities determine how to market themselves to attract talented out-of-town workers. They interviewed 2,500 employees and entrepreneurs nationwide who ranked New Orleans as their fourth least favorite pick for places to move to. Amongst our cited ills are population shrinkage, murder rate increase, and post-Katrina tourism industry challenges. The negative attributes rankings were health and safety (55%), image (49%), and environment (45%).

Hmph... Well on behalf of New Orleans, allow me to say that we don't want to be with anyone who doesn't want to be with us. I, for one, am tired of Homogenous Nation's negative opinion of New Orleans. We cannot be everything to everybody, especially imagination-lacking, subdivision beige house loving, mainstream America. We're busting our asses to put this city back together and take it to the next level - it's a GD mission! So if you're not feeling this, move over and let the ones through that DO wanna get with us.

Ironically, the other cities that made the survey's Top Worst List happen to be our sister cities:

Apparently, the respondents are not so much into catastrophe, flava, or drama. Okay, I get that. Again, this aint for everybody.

The other irony is that our economy is still growing and outperforming the rest of the nation - we're actually ADDING jobs here while the rest of the country is losing jobs. And according to CityBusiness, New Orleans is fast growing as a hot spot in the tech sector. So I have a feeling some of those naysayers are going to be eating their words about us sooner rather than later.

Oh it feels good to be able to say that and actually believe it has a chance in hell of being true...

Anyhoo, I'm filing this after a fabulous Creole Italian dinner and too much wine and song at Vincent's. Now I'm off to catch one of the best live music shows in the country - the Rebirth Brass Band at the Maple Leaf, which will be packed as it is every middle-of-the-week Tuesday night. And the night won't end till the band says it ends.

Ah New Orleans, my beloved... If loving you is wrong, I don't wanna be right!

RIGHT ON! I LOVE MY CITY!

And if THOSE two sentiments I just expressed are wrong, I don't wanna be right.