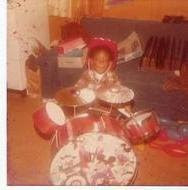 Ladies and gentleman we are now in the home stretch for Christmas. There is only seven days left until the morning where people all over realize all the kids wanted to play with is the box that the toys came in. I think it's time to start having a good time. That means unless someone has gone absolutely crazy there will be no political talk here. Tomorrow is my office holiday party and I plan on spiking the punch with Crown Royal. The picture up there was taking on Congress Street in New Orleans on Christmas Day 1979 (The flood water spared enough pictures so we can at least remember what we looked like as children.) That is still a top five Christmas. I can't prove this and they never discussed it in front of me, but I believe my dad took me for a ride one day so my mom could burn that drum set. I was only five at the time but I swear it just disappeared. Right now I could be traveling as a drummer in Erykah Badu's band and trying to get her to date me instead of another rapper.

I recently came across your blog and have been reading along. I thought I would leave my first comment. I don't know what to say except that I have enjoyed reading. Nice blog. I will keep visiting this blog very often.

u should be playin for da Mental Patient marchin band...LOL!!!yeah man i didnt see that one on st claude...luv walt