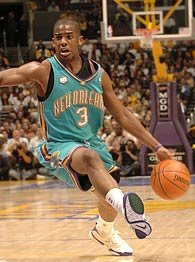 I am watching this Hornets game on NBA-TV and I would like to apologize to Chris Paul and the rest of the team. See, I have been mad at Byron Scott for two years about some comments he made when the team was in Oklahoma City and I haven’t been to a game since. That has been a mistake. I spend all this time following the Saints who sometimes play with absolutely no passion whatsoever and possibly the MVP of the league is representing every night with my city’s name on his chest. Not only is he a great player, he also has high character and a young brother like this could be an example for some of these young soldiers walking the streets. This kid is a role model plus he’s got mad game. He reminds me of a young Isiah except he hasn’t punched anybody yet. I hereby endorse going to as many Hornets games as possible.

I'm going to have to give the Hornets another look-see. I was also put off by the comments made in OK City. Plus they were already here begrudgingly, so that just left a bad taste in my mouth. It was disappointing.

I agree with you on Chris Paul with the exception of this statement: "He reminds me of a young Isiah except he hasn’t punched anybody yet."

There is, of course, the infamous cock-punching college incident, after all.

Breez,
Somebody has to go to the game because the other night they played Toronto and there were entire sections without anyone sitting in them.

Happy New Year to you too. I will correct my statement.

He hasn't punched anybody in the NBA yet.

Yo Cliff....I REALLY like this post. CP3 has DEFINITELY been doing his thing this year, and it's shameful that there aren't more of us who support him and the Hornets as a team. They are certainly not only one of the best teams in the West, but in the entire league. Maybe I'll post a highlight clip on my blog to promote them a bit. Since you get far more views than I, maybe you should too ;-)