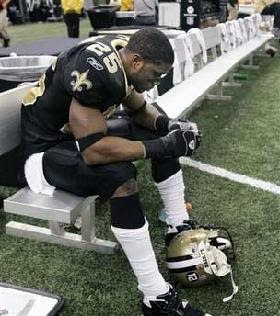 I have been a Saints fan my whole life....That was the worse play call I have ever seen.
It is times like this when I realize just how much Hurricane Katrina changed my perspective on life. If Sean Payton would have called that reverse about five years ago, I really think I would have drove to his house, parked outside and waited for him to come home so I could challenge him to a fist fight. Now, with my new priorities about what’s important, I only want to find his phone number and make a few anonymous calls to his office voicemail calling him so many cusswords that he gets the number changed.
I know Tom Benson believes in getting the most for the least amount of money possible. If he gives me 20% of Reggie Bush’s salary I can get to the line of scrimmage and fall down. I might even catch a pass or two for no gain.
We could have kept Joe Horn and Fred Thomas around if we were going to do this. At least they were like family and I wouldn't feel so bad.
Posted by Clifton at 12/02/2007 08:44:00 PM

It will be okay. Sorry but our predictions on this season were correct. Well I guess it's back to saying next year will be better. Die hard fans never give up. (I still have my stickers on the car) cheer up, I will do the prank calling for you CT. I know you are suprised I left a comment. LOL