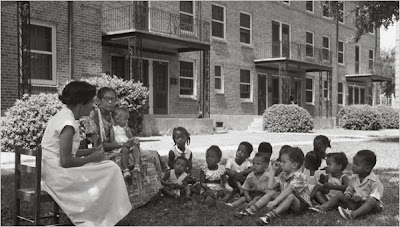 This project dispute is crazy. I could see the benefit in tearing down the old projects and replacing them with better mixed income homes. On the surface it seems like a good idea except for the Lafitte Housing Development. Those buildings are in decent shape and it would take three Katrina’s to knock it down. I wouldn’t have had a problem with the rest of them at first. Then I thought about how our government does things. I thought about all the people in Duncan Plaza and under the Claiborne underpass sleeping in tents and on concrete. Then I thought about August 29, 2005.

Who gave any of these jerks in power the right to decide who’s worthy of coming home and who’s not? Who gave them the power to determine who’s a worthy resident or not even though the federal government’s faulty levees cost everybody? There wasn’t a bunch of brothers from the St. Bernard Projects jumping up and down on the wall of the 17th St. Canal and made it fall. Uncle Sam's spotty work did that. Where is it written that people coming back to the projects will bring extra crime? What about all the crime going on now from people in houses? I guess the next step will be tearing down all the rental property too. You will have to be a homeowner just to get a New Orleans pass. The real issue is our lack of ability to change the conditions of our citizens. I find it sad that a city that has done nothing to make the lives of these people better would now choose to keep them out of here instead of coming up with anything progressive to change the situation where they want to live. Let other cities take care of all the people they stole from and oppressed. I would love to see my people in better facilities than some of the current developments. Lets be honest, it will be ten years before the government puts forth the effort to rebuild all of those apartments if they ever do. I have no confidence in the powers that be to replace all the housing they are about to tear down.

On the other side of the coin I have a few concerns. The first concern is that these fools will come back with the same kind of violence that causes the local media to salivate and run story after story to prove a point. My other concern is that after two and a half years why are people willing to fight this hard to get back into some of these apartments? I know you should have the right to come home, but have you done anything to make things better? I still don’t understand coming home to New Orleans to be homeless when there was available housing in other cities.

How about this idea. What if we repair these apartments, let the people come home with a commitment that in 5 years we will cut the occupancy level in half? Imagine how many creative ideas could come from that kind of commitment.

Never mind, that’s a horrible idea. I forgot that in New Orleans progressive thinking is worse than that stomach virus that’s been going around. Let them all come back home. My quality of life won't get any worse with the extra people.
Posted by Clifton at 12/10/2007 06:15:00 PM

I suppose some would say that the mixed-income developments are the "something progressive to change the situation." But as you say, given the track record of government around here, it's unlikely to work out that way.

I don't know how to feel about this issue. Yes, there is a real housing shortage. But the sight of people *clamoring* to get back into the noorious New Orleans "projects" quite boggles me.

Due to the political climate in the city it doesn't seem as though these people will be able to come home. Every citizen has the right to return home, even if it's to the projects. I've been waiting on the outrage from community organizations, but I guess poor people don't get the same support.

You're advocating improving the administration of public housing into a program that lifts people up (rather than giving them a crutch to lean on for life). Why the hell would Uncle Sam want to do that? oh no we can't have our maids and cashiers and janitors and nurses aids and what all actually achieve self-sufficiency. That would be almost as bad as giving their kids a good education.
Cliff, you've hit the nail on the head. It's not the buildings that need to be torn down and revisioned, reconfigured, rebuilt. It's the way public assistance programs are run that needs to be trashed and started over.

k2.0 Notorious or not, some of these people call the projects their homes. Whether it's in a project or a mansion, at the end of the day, folks are folks and we are all instilled with a sense of home. It's not really about the building. It's about the tone that since they're poor, they don't have the right to retain any sense of home.