Still Down With Reggie 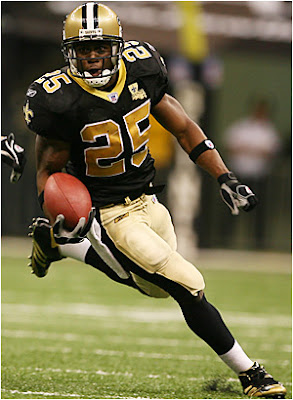 I am willing to risk being called an over zealous fan to write this letter. Listen Reggie, I know you left the Dome yesterday without talking to the media. I won’t blame you or that because honestly I probably would have drove my car home in full uniform. Let me just get to the reason I am writing this letter. We have never had one single player with the superstar status as you Reggie. You are the first Saints player I have ever seen on non sports stations on weekdays. You are the single most visible resident of our city. Actually, Lil Wayne is probably just as popular but I don’t think he will be on any United Way commercials anytime soon. I know you put a lot of pressure on yourself Reggie and I don’t want to add to that. But I need you to do great. I need you to shine Reggie. I’m not going to put you down like some people. When the city needed a boost you came through last year when you could have pulled an Eli Manning and refused to be drafted by the Saints. That will always put you on top in my book. You just have to stop looking like you forgot how to play football. I know how it is to lose your confidence sometimes. Even the simple things that you can do in your sleep seem really difficult. That’s probably why you are dropping all those passes and letting everybody throw you around like a rag doll.

When I am not feeling too well about the way things are going, my daddy always tells me that if you can wake up from it the next day then you can overcome it. Just remember all the opposing players and media that have said you can’t get the job done. Stay in town this off season and workout with the team instead of hanging out in California. Add about 20 pounds so you can take the pounding. Watch some film of Brian Westbrook from the Eagles to learn how a smaller back should run between the tackles. Come back next year, have one of those highlight reel seasons and stick it to the haters. Even if you never have that season, it’s ok. You can still stay in New Orleans. The next time I have a fight party you can come over and get a plate of red beans and some BBQ hot sausage. Hell, bring Kim Kardashian with you as long as you don't mind her signing a copy of my King magazine with her on the cover. You always have a home here in New Orleans. Just promise me that if Sean Payton makes that call again you pretend you don’t hear him and keep the ball.
Posted by Clifton at 12/03/2007 07:39:00 PM