This Is How It Happens 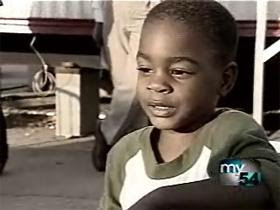 I just got back to town from vacation and it didn’t take long for something to piss me off. I would never condone hitting a woman. I am not really endorsing hitting one now. However, if anyone knows this little boy’s mama……….and his daddy for that matter, please feel free to whip their asses for me. It’s bad enough the boy was alone in the gas station with no shirt on. Neither one of his parents went down there to get the child. See, this is why police and district attorneys have nothing to do with crime. You take a sweet kid like this one and make his circumstances at home so rough that he is taking care of himself at the age of five. Then you give him a piss poor education and no guidance. Twelve years later when he is seventeen, he will be kicking in someone’s door or in a vacant building making a drug deal and everyone will make him a monster. He’s not a monster. The truth of the matter is that he never stood a chance of making it as a regular citizen. No one wants to do a damn thing about the future that he and many of these young brothers face. They just want to build billion dollar facilities to make his legal slavery as comfortable as possible until he gets stabbed on the recreation yard. Maybe his mama letting him wander into that service station might be the best thing that ever happened to him. Instead of wasting all that time worrying about Imus and Dog the Bounty Hunter, we need to figure out how to keep this stuff from happening. Where are the plans and the rally to stop this? Somebody call Bill Cosby. I’m going to the store and find out how to send this baby some clothes. I hope we can find out what happened to him since the Times Picayune put the kid on the last page of the Metro section in a small little box. If little Timmy from Metairie would have been lost and abandoned he would have had his own section in this morning's paper.
Posted by Clifton at 11/07/2007 07:57:00 PM

You're absolutely right. This is the kind of thing that quietly transforms kids into nothing-to-lose criminals. Even though this is an extreme example there are MANY instances in which a kid is completely physically and/or emotionally neglected within the walls of his or her own home. It's happening right now with my niece and nephew and there isn't anything I can do about it.

Of course, I can't see how making this child a ward of the state and arresting the parents (even though my initial reaction is to put a boot to them) is going to solve anything either. One of the things I'd love to see is more stable black folks adopting children who need homes.

There has just been an across the board breakdown in communities. One of my favorite quotes from Bernie Mac is, "Big Mamma gone."

Remember how back in the day, the older relatives would have taken the child into their homes. Just this morning I was thinking of how many of my peers spent extended periods of time with more stable family members until their mothers gained ground again.

From a personal standpoint, I remember when I was struggling financially, and my daughter spent a month with my sister in Shreveport.

It's sad that as black people, so many of us have lost our "village" mentality.

All different sorts of people have lost their "village" mentality. As we are all forced to pursue the job and the almighty dollar, and that can take us far from families and good, good friends, the ties of blood and decency unravel. Nobody wants to step on each others' toes. Nobody wants to tell each other how to live or offer help in the event that the offers and advice are misconstrued as "Oh. I'm not capable of taking care of my OWN business?"

In one way or another, we all have to wake up. Maybe thicken our skins a little (which is MUCH easier to say than to do, I know from my own experience). I'll never forget, just before we moved back from NYC, a case of a seven year old girl tied to a chair and beaten to death by her parents. The few times I saw news reports of it, the one thing that always shattered me was seeing the police at the scene hauling out the chair she was tied to. How in hell could someone that young simply be sitting in everyone's blind spots for so long? Nobody cared until it was too late.

We need to care, period. We need to NOT BE AFRAID to care.

First time coming thru....definitely wont be my last...like the commentary!!

Think of the emotional scars that kid is going to have - that his mother doesn't want him and he may think that it's because he's not good enough when his mother is really one of the most worthless humans on the planet.

This is why we need licenses to have kids. Any dumbass can get knocked up and drop a baby and that is too dangerous and precious a power to have.

God, I want to adopt that kid, but think of the therapy sessions and his mama coming back to raise hell.