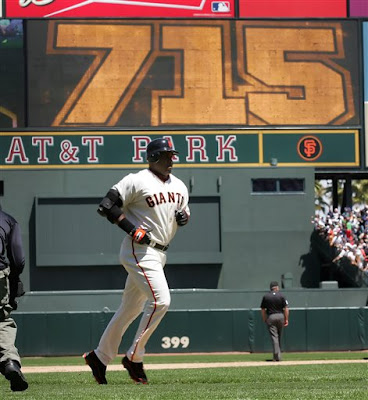 I have understood white people being obsessed with O.J. Simpson. You have to wonder if he spent that much time around white people trying to be one how he doesn’t understand it. I never had a problem with it. I like to think realistically. If that would have been a famous white athlete that sliced up two black people we would have never stopped picketing his ass until he confessed. O.J. going to jail doesn’t bother me.

What am I bothered by is the public anger towards Barry Bonds. The sports media is obsessed with this man because he did the same thing hundreds of athletes have been doing but happened to be so talented that he smashed all the records. If you listen to sports talk radio during the day you would swear that Bobby Bonds helped plan 9/11. They act like Barry Bonds is a master chemist and invited the cream and the clear. They want him to do time in prison. They want asterisks by all of his records because he cheated even though there is no record of a positive test. The questions I have are this. Are the owners who made profit from all the games that Mark Maguire and Sammy Sosa were chest bumping and hugging Roger Maris’s family going to give that money back? What about these 45 year old pictures still throwing a baseball 90 miles per hour? Are we going to throw out every stat from 1990 until now? If the answer is yes to all of those questions then go ahead and curse Barry’s name. If not, you are all a bunch of hypocrites.

Barry’s main problem is that he doesn’t kiss the ass of mainstream media and they hate that especially when a black man does it. If treating the media with disrespect got you this kind of treatment then how did Bobby Knight coach so long? The only thing I wish Barry would have done for my enjoyment was to get to home run number 716 (passing Babe Ruth) and then retired five minutes later. That would have been awesome! I would have called in from work just to watch ESPN and see Mike Lupica have a heart attack.
Posted by Clifton at 11/16/2007 08:44:00 PM

As a kid, I idolized Hammerin' Hank. Bonds never did anything for me, although I did have a Bobby Bonds model glove growing up.

And the best thing about OJ was when he was in the booth on MNF when Eric Dickerson broke his record. Somebody in the booth said "I hope he gets a loss on the next play, so he can break your record again".