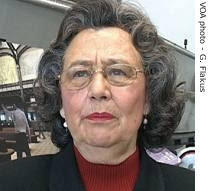 I am trying my best not to be so negative about my city. There are a lot of good plans being announced these days. Plans around here are just like opinions. Everybody has one. Something that I can’t get on board with is Jackie Clarkson being on the city council again. I have been ranting and raving about Ms. Clarkson but I don’t know if I have done a good job of clarifying why.
Jackie Clarkson looks and acts just like my sixth grade English teacher. It’s probably her cousin or something. She’s got that same hairstyle she’s been wearing since the 60’s. She wears those DH Holmes outfits. She’s got that pompous way of talking in that New Orleans accent that implies she is always right and nothing you say makes any sense to her. It always feels like she is looking down on everyone. I can still remember my 6th grade teacher correcting the way I speak no matter how hard I tried to tone down my New Orleans accent even though her twang was worse than mine.
The point I am trying to make is that I have known people like Clarkson my entire life. She is back on the council with one goal and one goal only. That goal is to make sure that the class of people she hangs out with does not get any part of their good life disturbed. This was proven when she held up all the early trailer sites and altered the plans of thousands to save the fun of a few golfers. There were people who’s neighborhood’s were still in the dark and she wasn’t bothered at all. What makes everyone think she’s really worried about the homeless or affordable housing? New jobs don’t mean anything to this crowd either. Their kids have jobs set aside for them by the time they pass to the eight grade.
After Eddie Jordan resigned when I said he wouldn’t, my physic skills have taken a hit like Ms. Cleo. I am going to predict the next few years in city government. The French Quarter, Algiers and any non flooded neighborhood will be in good shape. All you people who are not making enough money to afford decent housing or want to sit around in public all day and not work, you better look out. Ms. Clarkson hates to see people sitting outside and she doesn’t care if you don’t have anywhere else to go. I just hope Arnold Fielkow is progressive enough to fight back the “ they can come back as long as it ain’t around me movement”. The vibe in the city is about to change. You know what the saddest part of all is? Cynthia -Willard Lewis is the exact same kind of person that Clarkson is. She’s just a few shades darker and we don’t want to admit that there is a high society of black people here too. Jackie’s crew is also less likely to steal from the government because they already own and control most business in the city anyway. I hope I am wrong again and things get better for the hood. We have already had too many years of the privileged passing around money to one another.
Posted by Clifton at 11/28/2007 09:51:00 PM

You found the perfect photo. Looks like she is going to demand your Hall Pass.

Man...I can just smell her old woman gramma perfume from that picture.

With any luck, some new candidates will come out of the woodwork (Percy Marchand, anyone?) that will replace the CWLs. the Clarksons, and perhaps the Fielkows.

Obviously you have never seen JC in her tight red dress with the slit up to her waist almost with no pany line. You know what that means? Hubba hubba!

I'm sorry I haven't hit you up for a while.

THIS..is a beautiful post, man. I often enjoy the way you deftly cut through all the bullshit.

"She is back on the council with one goal and one goal only. That goal is to make sure that the class of people she hangs out with does not get any part of their good life disturbed."

"Jackie’s crew is also less likely to steal from the government because they already own and control most business in the city anyway."

This is a Nail-on-the-Head analysis and, unfortunately, I doubt you're wrong about one word.

Jackie was the least bad choice. Maybe she'll retire after one term.

Mom and Ashley put it right: JC was the least offensive choice for the Council.

The way I see things political over the next few years is that more of us locals will get more involved and cognizant of what really goes down in City Hall. Better candidates will show up and by say 2012 maybe we can elect a Progressive slate to City-wide offices.

Personally I dislike JC. (That comes from a few years ago concerning the Marigny and a comment she made to me concerning the fact I didn't own property and therefore didn't matter much with my opinions.) She was better with me right before the Flood, but I wasn't in her District anymore.