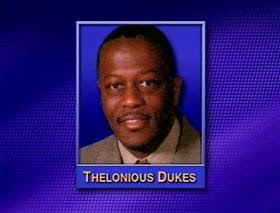 I didn’t know Detective Thelonius Dukes personally. I know some good people who knew him personally. By all accounts he was a good brother . It’s a shame this man is gone after a random act of violence. He was shot trying to defend himself and his wife from a home invasion a few weeks ago and died yesterday. I want to send my condolences to Mr. Dukes and his family. The strangest thing about this whole story is the guy who was hanging out with our ex DA’s girlfriend is a suspect. Even by New Orleans standards some crazy stuff is going on. Stories like this one along with all the other senseless murders leave me in a state of confusion. The reason I am confused is the black community of New Orleans sometimes seems like one big ass ghetto. I spend too much money on bills to feel this unsafe. I know a lot of smart people with enough income to move to the suburbs and not be around this stuff all the time. We live in these neighborhoods within the city limits with limited resources, limited progress and unlimited threats from a criminal element. I shouldn’t need a pistol to walk to my truck after dark. I never get into a deep sleep because I am too busy listening for noises and watching the motion lights. I guess the thugs have me paranoid. When I lived outside of Jackson, Mississippi after Katrina I never felt like this at night.
We are the people who’s friends and family in other places call crazy. As a close friend of mine loves to say “Cliff, you need to represent the city from afar”. Times like these make it hard to disagree. My reply to that statement is always the same. What’s going to happen to the city if we all leave? Someone with good intentions has to stick around the inner city. On the other hand, how much of a cost do you have to pay for a dream that may never come true. For months after Katrina I campaigned for my parents to move back to the Lower Ninth Ward. That was being selfish. The truth of the matter is that when I ride up St. Claude Avenue to their house and think about the neighborhood they live in now, there is no way I could promote moving back to that area. You can't compare the two enviroments and hard working people should be able to go outside without looking over and around their shoulder. Maybe getting closer to me would be nice but I wouldn’t sleep if they moved back to the original spot. That makes me sad to admit. The strangest thing about our people is that element that has nothing is running away the only people that are willing to give their ass a chance. If the working and middle class black community leaves this city, the ghetto doesn’t stand a chance. They are just to ignorant to realize it. My spirit is running low. I’m ready to leave it all to the thugs and illegal immigrants. My next vacation is going to be a permanent one.
This is dedicated to Fatt who lost her brother and Tina who lost her son……and my boy Renaldo Cains who’s murder 14 years ago made me realize there was nothing cool in losing your life that young for no reason.
Posted by Clifton at 11/09/2007 10:34:00 PM

As I was reading this, I was drawing the same conclusion that you have. Basically, the people who're being robbed and/or murdered are the people who're trying to make the city work again. As much as I hate to say it (and I don't live down there so maybe I don't know what the hell I'm talking about) I can't imagine the city, as a whole, ever returning to normality. I imagine it being like Jamaica - where the tourist areas are pristine and everywhere else is extremely dangerous.

Brother, if you feel as if you can't even sleep at night, you might want to start strongly considering making that move.

I'm not leaving any time soon. I just get aggravated with all of this sometimes.