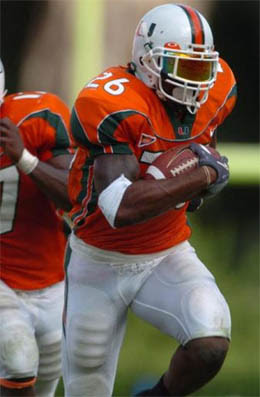 This post isn’t directly about Sean Taylor. I decided to write it on the way home while listening to talk radio. I didn’t really want this kind of inspiration. I’m not going to write about the killing part. Nobody knows what happened yet. I want to talk about choices. I heard a few of Sean Taylor’s old friends and teammates talking about how he was trying to change but had a lot of negativity in his life because of his old environment. Someone even said he was frightened whenever he was in Miami.

As rough as New Orleans gets sometimes I am usually never scared. That‘s because my name doesn’t ring out in many circles. The reason for that is I made a conscious decision to not be popular. There are people who grew up blocks away from me that have no idea who I am. Me and my grandpa had a conversation one time about making decisions. He told me one time that if you make a decision and you think it’s right, all you have to do is live long enough and sooner or later what you did will make a lot of sense even to the people who didn‘t like it.

One day when I was 16 years old, a conversation started at my friend Donald’s house. There were about 7 guys out there. The subject was what we were all going to do in a few years when we were “grown“. I don’t want to play the high and mighty role so I have to say that I wasn’t the only one that had a real plan. The thing that opened my eyes was the passion and the spirit of some of my boys when they were talking about their plans to rob a dope house or how they wished a drug dealer would drop some of his product and they could find it to get their business started. Right at that moment it hit me. I had to get the hell from around there. I went inside that evening and never hung our around that corner again.

Now, don’t think I am about to say that I never talked to those guys again or how I moved away from the neighborhood and got all these smart intelligent friends. I have love for every one of those cats. When I see them it’s all good. The only difference between me and them was some intense parental involvement. I love the neighborhood. I just realized that day that I wasn’t trying to rob any drug dealers or find any dope. Some of those guys were going to be on that corner forever. They chose their path and I chose mine. I probably missed out an a few really fun parties and a few escapades with some shady young ladies but that’s ok. I’m having more fun now.

mominem said...
This comment has been removed by the author.
Friday, November 30, 2007

It's funny how those things work. A lot of people are judging the Sean Taylor case, as well as most other instances of black misfortune, from on high. I have to be honest with myself and say, 'There but for the Grace.."

My best friend in the world, Ron, with whom I would skip school and chase girls, is dead now because of some knucklehead's bullet. The only reason I'm not laying in a grave next to him is because I was too chickenshit to take up his offer to start selling drugs with him. For a lot of cats, it's a thin line between life and death.

Your Grandpa was a very wise man Cliff.

My friends and I had to make similar choices many years ago concerning what we were to be in the Future. All of us wound up leaving the "homeplace", not in a spiteful way, but in order to "live our lives and our goals". Some are gone now, but not from bullets or drugs... auto accidents and just the possibilities of Life took them, but for the most part we all did okay.

The ones that didn't desire to grow, both white and black, are still where their parents were and there is no longer any way out for the few who are still alive.

Your Grandpa sounds a lot like my Mom... glad you had him to help you.

It now appears Sean Taylor was targeted because he was rich, famous and absent.

I do wonder what if he was trying to change his live and didn't feel safe in Miami, he didn't move someplace else.

From what I am reading, Sean Taylor's death had a lot to do with the people around him.