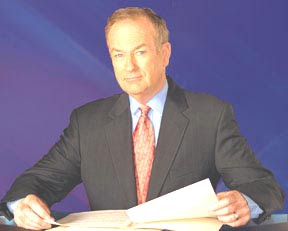 I have a question for conservatives. How did this guy get so popular with you? I have looked all over for something in his past that qualifies him to be a spokesman for the right wing agenda and have found nothing. He hasn’t worked for any Republican politicians. He didn’t go to school with Karl Rove. He’s not a member of Dick Cheney’s hunting party. I haven’t found one thing to make you guys love him so much other than the fact he’s on FOX news and says exactly what you want to hear. I’m not the biggest fan of Jesse Jackson or Al Sharpton but at least they have a history of activism that validates what they try to do. This guy was hosting Inside Edition and would probably be covering stories like why Paris and Nicole aren’t friends anymore if he hadn’t gotten replaced. Does that sound like the champion of American values to you? You people are so gullible. For all we know O’Reilly and Limbaugh get together on the weekends. They pop in a Tupac CD, roll up a fat one and laugh about how they are robbing you fools blind by validating your narrow minded way of thinking.

Zealots don't care at all about the the packaging of their mouthpieces - so long as said mouthpieces are saying what they want to hear.

But to answer your question, Bill O'Reilly is one of the soldiers on the front lines of the Culture Wars who is responsible for providing FLAK. That's his only purpose. "Serious" pols like Dick Cheney and Karl Rove wouldn't be able to get away with the shit that O'Reilly says so they leave it to someone who used to host Inside Edition to say what they wish they could.

So file me under stupid but I actually read one of his books. It was a short read that was completely void of intelligent information, just a lot of broad pronouncements with nothing more than anecdotal supporting information.

Don't worry--I got it from the library!!!