A Great Game To Watch 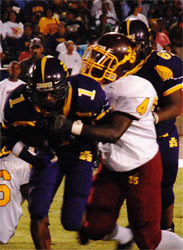 How much an event lifts the spirit of a community like often depends on where you come from in this city. Last night I was at home as usual on Friday night so I watched McDonald 35 Senior High play on ESPN. There have been many games, stories and specials since the storm about the city. I have to say that last night ESPN did the best job of highlighting the fighting spirit of those kids, the schools and the community at large. I can’t recall or locate the names of the two announcers but it was refreshing to watch an event with the attitude those two guys had. I loved the fact that they made sure to include those young men’s grade point averages and favorite classes. I am sure some people around the country were surprised that there are young men in that actually go to class and like it. Thank you ESPN for not exploiting the community. Thank you to Avery Johnson and Michael Smith of ESPN for representing their high schools and city. Thank you to the crowd for everyone behaving. Thanks to the parents of Derrick Dean, who did the interview at the end of the game and did a great job. Last but not least, thanks to Mother Nature and Tropical Depression 10 for not developing and running everybody out here before those kids had a chance to be in the national spotlight. I don’t want to be negative, but our local media sucks and only care about certain neighborhoods if someone gets shot or to tell us about all the people that have not came back. From my social perspective, watching that game on national television last night was more fulfilling then watching the Saints first home game in the Superdome last year. The Saints had the NFL, state and local government and surrounding parish support. The people involved in that game last night got back here on their own.