Justice is Better Late Than Never 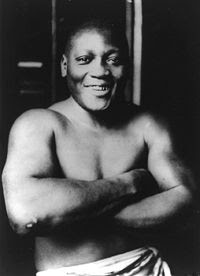 I just got through reading this story about how John McCain is pushing for Barak Obama to pardon Jack Johnson the first black heavyweight boxing champion who basically got convicted for marrying a white woman. If they were still going after successful black athletes for marrying white women a lot of cats would be playing overseas. This is one of those stories that make me wish my grandfather was still around because I would have to pay him a visit just for the chance to hear his take on it. First of all, why does it seem like a brother has to wait at least 50 years before wrongs that were done get corrected? We are even giving someone a pardon or a military medal they should have gotten years ago and now no one that actually knew the person is around to feel vindicated. I remember when Bill Clinton made the official apology for slavery and no one really cared. All I could think was how much better that would have felt if Abraham Lincoln would have done it back in the 1860’s when all the slaves could have actually heard it.
The second part that I find fascinating is that this proposal came from John McCain. I am not puzzled because John McCain is white. I'm puzzled because he's old and has been in office forever. President Obama is the fifth president since the first time he was elected. He could have tried to get Jack Johnson pardoned 25 years ago. I guess he was waiting for the right time in the country’s history where the justice system was fair and black men were treated without bias. Maybe Ronald Reagan wasn’t much of a boxing fan. Maybe he wasn’t much of a fan of interracial marriages. We’ll never know since he didn’t talk about minority issues. It doesn’t matter. At least Mr. Johnson will have his name cleared even though it’s been 63 years since he died. Better late than never I guess.

I know we have a financial crisis and two wars to win but I have to be honest and say that if I was the first black president things like this would have been squared away in my first two weeks even if I had to work a few hours longer get it all in. It would have been sort of a victory lap and conservative radio hosts would have been passing out on air from the anxiety attacks. That's why President Obama is the president and I never will be. He can ignore the small and unimportant stuff. It would be really ironic if he ignored McCain's proposal.
Posted by Clifton at 4/01/2009 11:30:00 PM