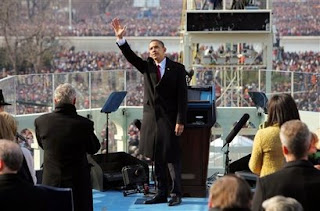 All of the pageantry and speeches are done. The weight of the world is on Barack Obama’s shoulders and now we get to see who among the mass of support is going to stay engaged and pay attention to what’s going on. People in my generation can be real trendy. It’s hard to tell exactly what our agenda is sometimes as even as I had people sending me email after email with stories about Barack Obama’s campaign, most of those same folks couldn’t tell me one thing going on in their own district and city. I hope all those folks realize that now is the time to be even more diligent and engaged than you were during the campaign. Everyone got mad at Tavis Smiley but he was right. If you can’t apply leadership to your own agenda then it’s worthless. That applies to Americans of any race, class, or location. When President Obama comes to your area you better be ready with ideas you want to do and how much it’s going to take to pay for them. As great of a leader he may possibly be, he still can’t sit in on your city council, school board meetings or at your house with your kids. We have to do all the ground work, the volunteering and the lifestyle changes ourselves. If there are any local officials in place that want to stop that kind of progress then get rid of them too. If we do all of that then maybe he can sign a bill to send us the funds to move forward.

The other thing people must do is very important. Please do not let your love and support for him lead you to convince yourself that everything he does is right. If you do, it may make you and him feel good about your ideals but in the end people are going to pay for it. I think if you ask a George Bush supporter who is willing to be honest they will tell you that they could have pulled him back in on certain issues before things spiraled out of control. They got too concerned with validating the principle and they forgot to think objectively. Now they are struggling too. That’s why his approval rating was so low. Many of those people were mad at themselves for not speaking out. It’s easy for a person to dismiss his enemy’s critique. It’s another thing for the people that love you to say you are screwing up. That forces you to look at yourself harder. There may be a decision or two that is not so good and you have to tell the truth and call him out on it. If we don’t call him out then who will? Everyone else will just sit there and watch him fail. It’s not hate if you challenge him. That’s what you are supposed to do to people you want to see succeed. That's why his administration has so many different kinds of people in it. He doesn't need you to kiss up to him. He needs you to speak openly and honestly even if you think he's wrong. That’s how I am going to approach this new thing. Let’s actually do something so in four years we can say things are better because of this moment.