My Personal Apology to Mychal Bell 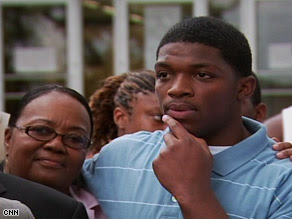 I would like to apologize to Mychal Bell for wearing black clothes on the day of the 6 rally. I’m not sorry for highlighting the unfairness of justice that was happening in the case. I am sorry for how everyone abandoned the kids involved. See, around the time of the rally I was actually thinking that the story would be a catalyst to spur on a broader look at social injustice and start a discussion about how to improve the situation for people on a broader scale using a grass roots movement that would eventually spread to the mainstream media. That’s what happened in . Who could have known that just four months later Barack Obama would win the Iowa Caucus and black people all over would forget about you and blindly embrace the same structure they were getting poised to challenge. Everybody started wearing their “Change” t-shirts and chanting Yes We Can! and you had to fend for yourself under all that pressure. The pressure must have been way too heavy because you tried to commit suicide to escape from it.

I have been checking the black blogosphere and visiting the same sites that posted stories about you until the rally. I have seen nothing about the need to send someone to down there to help you deal with all the pressure or to get you some counseling because you were getting in trouble before the Jena incident so it’s obvious you had some other issues. It’s our fault Mychal because we still think it’s 1965 and things are over once we get the symbolic victory. The only saving grace to me is that you didn’t deserve to be in jail as long as you were so it’s good we came down there in that aspect. It’s also a good thing that the presidential campaign was in 2008 instead of 2007 because you would still be in there now and the famous folks that spoke out on your behalf would have been too caught up in the election to talk about it. I hope you can forgive our lack of following through to the end.

My friend Lawanda really wants me to call out Michael Baisden for making himself famous at your expense but since we don't listen everyday we can't say you didn't mention it. Although if you had mentioned his personal problems as much as his legal ones when it was popular you could turn your show on at any moment and hear his name.

The sad part is that there are thousands of Mychal Bells, young brothers with issues that people make out of victims with out addressing thier issues. This young man is unique because he was thrown into the spotlight and no one tried to help him handle that. It's a cycle that we have to break in our community.Unfortunately there are not a lot of resources for family's who have a child headed in this direction until they get into they system. That's why we have to have to change it now.