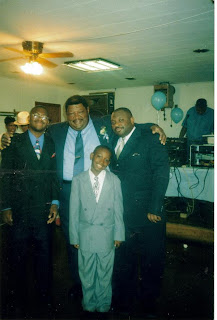 Last night I sat around sad and angry because a young man's self worth was so low that he saw no problem in murdering his own son so he wouldn't have to pay child support. While he was an extreme case, there are many young men walking around with the same problem. Eventually their children are going to deal with it too. It's an epidemic that we haven't started treating as such.

Today is Clifton Joseph Harris Sr.'s birthday. On behalf of my brothers and sisters I would just like to say happy birthday, I love you and thank you for making this one community issue that we never had to deal with personally. You set the bar for manhood really high. I have a nice big cigar to smoke in your honor today. I think you would like this video clip.

Here's to all the ones who do right. My mom's birthday is tomorrow, to boot. Lot of good people born in January...