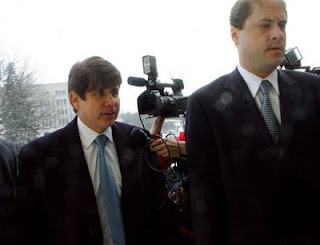 I have been under the weather this week because my body and Mother Nature can’t get in tune. There’s a virus going around and it found its way to me. I left work today and burned one of my 20 weeks of sick time. I never take off from work. There are some new strains of virus out here. It’s like one person gets sick and 10,000 other people get it. I have to get right because I don’t want to be the sickly looking dude on the Beyond Jena Panel Saturday morning.

I just got through watching Governor Blagojevich’s press conference. That guy is entertaining. If he gets a radio show I am listening. He’s a little crazy but it all appears to be so natural that you start liking the guy. I wonder what’s worse, getting impeached by a vote of 59-0 or having the entire state senate stand up and cheer after the vote was announced. The governor was standing outside listing all his accomplishments as governor to reporters. I was thinking if he could do all of that and still be improper than he can run for office here. At least he did some things for the citizens and himself. Our leaders get in trouble and can never rattle off that many good things.

I went to a parental involvement meeting down at the school yesterday. There were thirty parents there and only four men. Brothers, we can have a black president, governor, mayor and the entire city council can look like Wesley Snipes. It won’t mean anything unless you get involved with your own kids and family.

I understand Republicans have basic principles and that the new administration wants an end to old politics. Everybody’s trying to pass this stimulus bill and judging by the numerous reports of layoffs everyday they need to do something soon. I just want to tell all the republican senators and congressmen and women that if you guys are so weak that Rush Limbaugh actually scores a personal triumph and gets any official meeting with someone in government about the stimulus, none of you should get re-elected. I know you need votes and campaign funds but that should be embarrassing.

No matter how much money we give the banks and the auto industry the stock market is still dropping and people are still being laid off. When you factor in the fact that President Obama ended up hiring some of the same people who caused the problem and put them in charge of fixing it, isn’t it time for everybody to just admit that no one knows what to do about the situation? When are we going to call the Wal Mart people up and put them in charge?

Remember when everybody thought that Richards and Metro Disposable were over billing the city for sanitation? There was almost a riot about wasting money on sanitation. Remember all those blogs that listed how much money Richards and Metro had contributed to certain members of the city council? Remember when the report surfaced that these two companies were actually under billing the city and it appeared that SDT, the company that takes care of downtown and French Quarter was actually over billing the city? How do I explain to all my angry black friends the reasoning behind not only no one being that upset about SDT’s over billing but we are about to go to court to force the mayor to keep paying them every dime? People have been coming to the French Quarter for decades and it smelled like vomit and old garbage. Tourism has been down lately so maybe we should let go back to smelling bad. I don’t care as long as no one tries to take away my big black garbage can provided by Metro that seals in all smell between pickup days.

At the same time, it’s a shock to the system to hear Councilwoman Stacy Head on the Home Team morning show taking questions from citizens and engaging them. When she first did it I thought she was just going to do it one time to take the heat off the people thinking she was a racist. She’s been on a few times now and she’s not patronizing at all. I respect her for that. Now it’s time for the two ladies who run the area I live in to come on and take some questions.

I’m taking another happy pill and I’m going back to sleep.

so now i see y politicians got all that loot lol

Get well, Cliff. Looking forward to seeing you tomorrow.

Oh SNAP!!! I need to check out the Stacy Head on the Home Team morning show! What days is she on? Does she have a schedule? Has anyone really laid into her?? I need DEETS!

What a coup for the home team LOL!

PS - be careful what you wish for. CWL on the radio... I'm a let you marinate on that!

The last time I was on Bourbon St. it didn't look or smell all that great but the granades were off the chain! You guys are over paying in a major way.