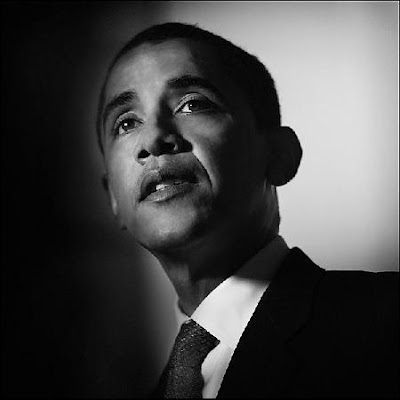 First of all let me state my personal view on blacks running for political office. I personally think that politics were the worse thing that happened to black leadership in American history. There has been more disappointment and more people have been bamboozled because they related election wins with overall progress. We really have nothing to show for political gains. That’s why I don’t back any candidate just because of skin tone.

The presidency is a different set of circumstances. He is the leader of the free world and the symbol of what we stand for as a nation. Unless Obama tattoos a confederate flag on his head and dances a jig with black face in front of the Lincoln Memorial, the symbolism alone is worth it to vote for him in my view. Seeing his victory speech tonight was a good feeling.

I just wish I was really on the bandwagon. What is it that I am missing about his message? I may not be listening objectively. I am going to call it the Ray Nagin/Oliver Thomas/ William Jefferson/ Marc Morial/Cynthia Willard Lewis/ Eddie Jordan/Ellenese Brooks-Simms/ Insert your local black political here Syndrome. I’m just tired of getting played by my own folks.

However, do you know that Iowa only has a 2.3% black population? That brother is reaching more people than just ones that look like him. That has to count for something. Am I wrong for thinking he still can’t win in the long run?

Michael Savage made a good point on his show (Yes, I listen to the Savage Nation. I‘m a radio talk show and MSNBC junkie.) He said that the reason Obama couldn’t win was because all the white males that haven’t been voting would come out and vote just to vote against him. Maybe that’s true, but what about all the black people who haven’t voted since Jesse ran in 1984?

You know my favorite candidate is actually Jon Edwards. In a perfect world Barak would make him his running mate and then it’s all good.

Tavis Smiley said that Mike Huckabee would be one Republican candidate that would not concede the black vote to the Democrats. I need this race to happen just for the dialogue. The debates alone make me excited just thinking about them. America might not be ready for big change but we need to have the conversation.

The question now is how is Hillary going to attack this man in New Hampshire without pissing off all these black people.
Posted by Clifton at 1/04/2008 12:53:00 AM

I guess ole Hil IS in a bit of a tight spot, now that you mention it.

But more importantly, where'd you get the X/King/Obama composite shot? Kinda creepy. lol


[diggin' the new blog look. someone feeling a bit militant lately? oh wait...or is that just a black kid raising his hand in class?]

"Am I wrong for thinking he still can’t win in the long run?"

Respectfully, yes. I think you are wrong about Obama's electoral prospects, Cliff. I HOPE you're wrong. I think winning Iowa and NH would go a long way towards convincing people that Obama can win almost anywhere. He can certainly get an electoral majority against this fractured, pathetic GOP field.

Don't be too scared to get on the bandwagon. And don't let some of the New Orleans disappointments who happen to be black make you gunshy about rooting for Obama.

I would say you're right unless young people everywhere get up and vote. When I go to the polls I see a whole bunch of grandmothers out there and old white folks are some serious vote casters. It's not so much what the "country" is ready for as who is actually going to make it happen on election day.

After last night, I can't deny that Senetor Obama has a real shot at this. I think he does have the ability to bring out the young and old. Those people who haven't voted since 1984 too. He has the ability to inspire and we have been missing that for a long time. I thought it was just my black power gene that made my optimistic about the brother, but he made me a believer last night.

I just wrote about this, man. Listen to me..OBAMA CAN DO IT! You don't want to be on the wrong side of history with this one, brother. As I've written, I dislike ALL politicians. However, I have to acknowledge when there is a black candidate, who seems to have both integrity and a real shot. As you've written, the presidency is something of a figurehead position. One of the main things he or she should be able to do is inspire the American public. With regard to that, Obama can get the job done.

Ladies and Gentleman I don't know. I want to see what happens in New Hampshire before I jump on the bandwagon. I don't think I can deal with the dissappointment of him not being what he appears to be.

E.J.....
I am not feeling militant. I just think that picture kind of potrays me a little. Plus the colors look cool.