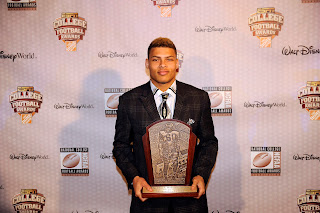 Sports are clearly based on performance and physical talent. No one gets drafted or plays a long time because they are a good person. It's also unrealistic because you can't tell your son to be Lebron James unless he's 6'8 250 lbs and can run and job like a gazelle mixed with a ballerina. You have to be born that way. Those abilities are the reason why they make a lot of money and things are made easy for them. I have no problem with that.

Tyrann Mathieu was a bit different. He wasn’t really supposed to be a star on the level that he became. I was really into the Honey Badger thing and every time he made a play it made me smile. It had a lot to do with my New Orleans bias towards young black men achieving things. It was cool to hear his deep New Orleans accent on ESPN and you could tell he wasn't trying to disguise it like some people do. It was cool to see him as a Heisman finalist. The only other time I even watched the Heisman program was when Marshall Faulk was a finalist.

In a sport based on size and speed the Mathieu seemed to overcome any deficiencies he had in those areas with tenacity and a spirit that made it seem like he wanted it more than every other kid out there. He was an example of a guy who actually earned his status in the spotlight. He made last season really fun.

The Honey Badger won’t be playing football this year. He has some issues that I hope he resolves even if he never steps on a field ever again. I read today that he is going to stay at John Lucas’ treatment facility until he feels better and then worry about football. I think this is a good decision because the last thing he needed was going to a smaller school and having all that attention without getting some help.

There are things in life more important than football. I hope someone close to him to him that there are things in life bigger than sports. I hope they let him know that he’s so young that whatever he’s going through now can be overcome if he applies himself with the same energy he plays football with. I would rather see the entire football season cancelled than for Tyrann Mathieu not to recover from his addictions. There’s nothing that depresses me more about my city than young people with wasted talent. We’ve had enough of those stories so I want the young man to come out this stronger than before.