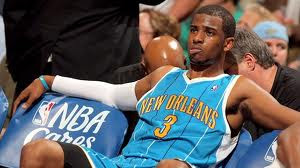 Before I get to the Saints I want to talk about the Hornets because this week was one of the dumbest episodes in NBA history. Not every relationship has to end with animosity or bitterness. Sometimes people grow apart because of circumstances and everyone knows it. That was situation with Chris Paul and Hornets fans. We knew he was leaving. That wasn’t a big secret. It’s just the way things are with basketball. For as much as the Saints are legitimate and respected team in the NFL, the Hornets are the opposite in the NBA. It’s been that way since they moved here and it hasn’t gotten better. It’s actually gotten worse. That’s not Chris Paul’s fault. He played hard every game while he was here no matter who his teammates were and never spoke negatively about the city. He was an active member of our community while he was here and I can personally vouch for that. Everyone had accepted the inevitable and it was going to be the smoothest way a franchise player could leave town without many hard feelings.
Then the NBA had to cancel the trade that sent Chris Paul to the Hornets because the other small market owners got pissed. I'm not a big fan of any of the players the team was getting back in exchange for the franchise guy but at least they were getting something. Since the league still owns the team there was nothing Chris Paul or the Hornets general manager Dell Demps could do about it. Now if the trade doesn’t happen Chris plays out the year angry and the Hornets end up with nothing because he’s signing with the Knicks or the Lakers anyway. The Hornets could end up with no owner, no CP3 and the worst record in the league because right now there’s not even a full roster. The NBA was more fun for me when New Orleans didn’t have a team.
The Saints play the Tennessee Titans tomorrow. I haven’t watched a lot of the Titans this year but I know they are a tough team. They have Chris Johnson who’s finally found himself and their running game has been strong the past few weeks. We have a good chance at stopping him. Our run defense isn’t so bad. The Titans quarterback is Matt Hasselbeck. He’s the destroyer of Saints Superbowl repeat dreams and the man in Roman Harper’s nightmares for the past year. When Roman Harper’s on the field Hasselbeck turns into Joe Montana. I hope Malcolm Jenkins makes this not as big of an issue tomorrow. He hasn’t quite been standing out either. It’s usually the games against an offensive player that should have a big game where the Saints defense steps up the most.
A win tomorrow means another 10 win season and a playoff berth. Tennessee is trying to keep pace with Houston so they will be playing with playoff intensity as well. I think the game will be close because it’s in Nashville and the Saints defense makes a play to change the game. We get the win and change our focus to winning the division and catching San Francisco for the number two seed.
Saints 27 - Titans 17
P.S.
While I was writing this the trade between the Lakers, Hornets and Rockets was resubmitted to the league. Even if it’s approved it doesn’t change how awful the NBA handled the trade on Thursday and how sad it is the Hornets don’t have an owner. As long as there's no owner they'll always be the least desirable team in the league for players.
Posted by Clifton at 12/10/2011 12:20:00 PM