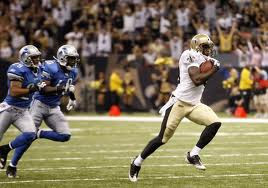 Tonight the Saints play the Detroit Lions in what I called a few years ago the Struggling Bowl because of the state of both cities. In the three years since I wrote that the Saints won a Superbowl, New Orleans has a new mayor and some things appear to be getting better. I wish I could declare victory in the tale of the tape against the Motor City but thanks to the auto industry bailout they still have Ford, Chrysler and Chevrolet. That has to count for something. The Lions play in Ford Field. We have the Mercedes Benz Superdome. At night does an image of an Ford F 150 drive around the stadium with flashing lights on? I’m giving us a slight edge since the Benz Dome is always lit up like a Christmas tree and it’s the holiday season.

We have Treme on HBO to spotlight our city. The show is set during the time right after the storm so it’s not the best representation of the current situation but if it makes people visit and spend money I am okay with it as long as no one stops me on the street and asks me to dance. Detroit has the best group of meter maids and traffic people on Parking Wars. I’m giving Detroit the win on television entertainment because of the dude on Parking Wars they call Ponytail is more entertaining than the Mardi Gras Indian gang on Treme that showed everyone their suits before they are ready. That’s not supposed to happen.

I’m deducting ten points from each city for crime.

Detroit is on the verge of bankruptcy and the state may have to step in and take over. I’m going to give New Orleans the win in this one because we are poor but not bankrupt and have only lost control of our schools. You know, if the bug three automobile companies are doing so well now why is Detroit and the surrounding cities so broke? I thought when the private sector was doing well financially people would have jobs and that would take care of everything? Shouldn’t they be rolling in cash? I guess the trickle down hasn’t started yet. I’m giving New Orleans the slight edge on fiscal shape.

As far as tonight’s game goes I think the Lions are having a good year considering where they were a few years ago but they are too inexperienced and not ready to deal with Drew Brees at home. There’s still a chance for the number two seed and after last year I think Coach Payton doesn’t want to end up playing on the road the first week of the playoffs if he can help it. I expect the Saints to play with playoff intensity. Detroit won’t quit because they have enough talent on offense to score on defense and their coach is too crazy to give up. As long as we contain Megatron Johnson we’ll be okay If Houston can hold on against Atlanta today and we win tonight we can get some cushion in the division.

Saints win this year’s Struggling Bowl by a score of 34-20.