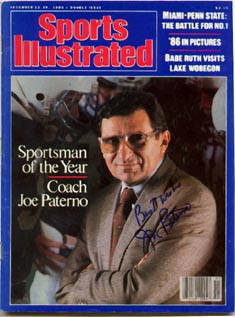 I love college football but this Penn State story has really messed up the season for me. I was at Children’s Hospital the last few days because my baby wasn’t feeling well. When you walk around that place for awhile it really reminds you of just how vulnerable kids are and how much we as adults have a duty to protect them from as many harmful things as possible.

I don’t feel like I am equipped to speak about the effects of child abuse so I won’t disrespect the victims by talking about it directly. I also don’t feel like I can make sense of the things Jerry Sandusky allegedly did because I might say something misguided and ignorant. Sexual abuse is a serious issue and while everyone should have their own opinions I don’t know if we need everyone to speak on it. I’m going to leave that to the experts.

The part about this story I want to talk about is how the decisions of one person can affect the decisions and lives of so many others. In this case there was two major ones involved that really highlight how human beings think. The first one was the graduate assistant Mike McQueary who walked into that shower and saw one of his mentors in life having sex with a kid. He left the scene without the kid and called his dad who told him to leave and tell Joe Paterno what he saw. Everybody has things in their life they have done or didn’t do that they second guess. I think about those kind of decisions all of the time. However I have to think that if I walked up on someone having sex at my job I would have said something even if it was two adults nevermind a kid.

Even if the initial shock made you so confused that you left I would think the guilt and second guessing would either make you ask everyday what was going to happen to Jerry Sandusky or you would have to quit and go to another school because you couldn’t look at yourself in the mirror knowing that guy was still free and possibly still abusing kids including the young boy you left there in that shower. Humans have a natural instinct towards self preservation. When people in bad neighborhoods don’t snitch they are doing it to keep from putting themselves and their families in harms way. The only thing in danger for Mike McQueary was never getting to coach at his alma mater. I can’t respect that and feel like he should never get another coaching job anywhere. He made the choice not to say anything so if he can’t coach again then so be it.

The other person in this equation who has a burden to bear in my opinion is Joe Paterno. I know he didn’t touch a kid. I know when he got the news from his employee he went up the chain of command the way he was supposed to. I know Jerry Sandusky wasn’t on his staff anymore. I get all of that. The reason why I think it’s perfectly fair for people to come down on him is because since I started following sports as a kid all anyone has ever done is kiss Joe Paterno’s ass for being a man of integrity and dignity. There’s some people who’s personal stature transcends their official title. You might have someone at your job that’s not even in management but their character and standing is so great that even the owner of the company listens to what they say. That’s the kind the pull Joe Paterno had. In fact, his stature was so great that I believe he could have got this case investigated and resolved at another campus just on the strength of his name.

Usually the people who have that kind of status know it. Even if they don’t flaunt it all the time they know it’s there and that’s why I can’t excuse the coach for going up the chain of command. I think he knew what would happen if the story came out in the open and he just didn’t want to deal with it. He also didn’t want to be the one that took down his long time friend because it’s human nature to not want to see your people fall. When you make that kind of decision over the safety of kids I can’t feel sorry for you if you have 409 wins or 4. I would like to think that even if I went to Penn State I would feel the same way and not be so caught up in the aura of the football program and it’s coach that I talked myself into making excuses for adults who enabled a child predator. Actually I know I wouldn’t because it’s also human nature to recognize right and wrong and this degree of wrong was obvious.
Posted by Clifton at 11/13/2011 07:19:00 PM

Cliff, I live three blocks from Joe Paterno. While he has never been a friend he is a neighbor. It is hard to lay such blame on him and toss him out. I don't think it has been easy for anyone who lives in State College. But with each passing day, we know more and more of what must be done. We cannot defend those in the football program or the school or the Second Mile Charity that was in any way involved with covering this up. The only people we need to defend in this situation are the victims of Sandusky's crimes.

I know that everybody is putting in their two cents worth, but I'm glad you did. Excellent post!

I really wish someone above him would've nailed my elementary school principal. They knew. Once I got on the case, it was shockingly apparent that many people "knew", yet did nothing. God knows how many boys that monster dominated.