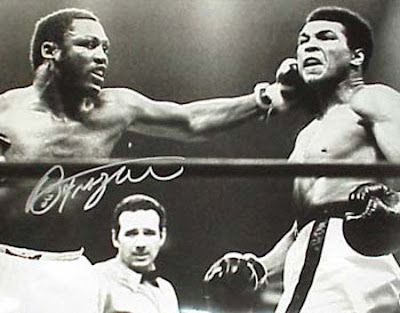 Rap legend Heavy D passed away yesterday at the age of 44. People under 30 may not remember the time where he was a pretty big deal in the hip hop world. I was sad when I heard he passed because it reminded me of a part of my teenage years. A day before boxing great Joe Frazier died of liver cancer. Whenever boxing legends pass away I think about my grandfather. I loved watching boxing with him and I loved listening to him tell stories about boxing even more. There are people who find it annoying when a big deal is made about the death of someone who hadn’t had a hit record since the early 90’s or a man who hadn’t had a fight since the 70’s. Someone doesn’t have to be on your mind constantly for you to feel an impact from their passing. I have friends who I haven’t seen for years like Joseph Warner or my boy Fred. If I found out something happened to one of them I would be just as heartbroken as if we were hanging out yesterday.

I think life is precious and we all should hope to live a long one with as much quality as possible. I’ve always found the loss of life hard to deal with it especially when it feels like someone left too early. My generation and the one following has had to deal with a lot unnecessary death from things like gun violence and drug related issues. After awhile it starts to weigh on you. It actually doesn’t matter if you knew them at all. I get upset when I read about horrible things that happen to people who I don’t know. Maybe I’m just getting overly emotional these days but there could be more of that in our society. Everybody gets caught up in the ideology and forget that there are people involved. I remember after Katrina when everyone was talking about neighborhoods returning and taking over school systems I kept feeling like there was something really disturbing about the fact that the thing we talked about the least was all the people that passed away. When you don’t give life its proper respect you generate negative energy. That’s the kind of energy that is all throughout our community. That’s the energy that led to guys having shootouts in front of crowds of people and some murder victim’s deaths make the second or third page of the metro section in the newspaper. I don’t know how to change that but I think we should start working on it.

Rest in peace to Heavy D, Joe Frazier, war casualties, victims of disease, any of your friends and family that are no longer with us and all the victims of violent crimes even the ones that look like thugs.

Amen. No life is perfect, and I believe all loss of life warrants a certain amount of mourning. It's what makes us human.

May God rest his soul in peace! He was a great man and a real talent!