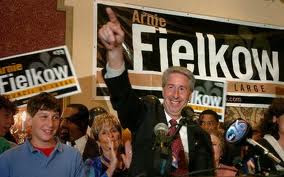 New Orleans City Councilman at Large Arnie Fielkow is stepping down to move to Chicago. He’s going to be the president of the NBA Retired Players Association. That sounds like a pretty cool job. I would like to wish the councilman well and thank him for his service to my city. I’ve never had an issue with Mr. Fielkow since he’s been in office. I didn’t like the NORD public/private partnership and even though I thought that plan was misguided and unnecessary I feel his heart was in the right place. He was just trying to help the kids.

In many ways the councilman’s story is the perfect example of a lot of our current residents. He’s not a native so he’s free of some of the baggage natives have. He came to town because of work. He and his family fell in love with the place so they decided to get involved and make a difference. There is more and more of this demographic around town. Most of them are cool and have a genuine concern for the city and all of its residents. Then there are others who are here to take advantage of our struggles and failures. They caught us at our most vulnerable and are trying to reshape our city for their own agendas.

I think Mr. Fielkow belongs in that first group. I would like to thank him for trying to do some progressive things to move the city forward and for never telling the world that everything here was going okay because we had a second line parade on Sunday.

Now comes the fun part because the councilman has to select an interim replacement and the council needs to approve that person. Then we’ll have a special election after that to elect a new councilperson. I haven’t made any predictions in awhile but I think whoever is selected for the interim post and how the rest of the council handles it will decide the next election. If there’s one more backdoor hookup to maintain a certain level of control by some members on the council then there’s going to be a pushback in the citywide race.