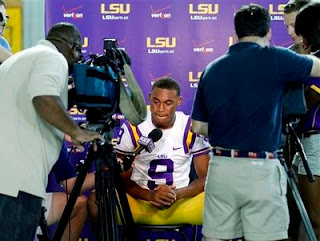 Unless LSU has been hiding something for the last few years I feel comfortable in saying that Jordan Jefferson is a good kid. Nevertheless he and his teammates did a dumb thing by breaking curfew and it led to him and a teammate allegedly being in a fight which caused them to get arrested and suspended from the team. Young men do dumb things. They always have and they always will. I did some dumb things at that age. I made some choices that were so stupid and hazardous to my well being that I pass certain spots in New Orleans that remind me of a crazy night and feel like I should go straight to church and thank God that nothing happen to me. Nothing too bad ever happened. I always made it home jail and bullet free. I was never a bad guy and never looked for any trouble but when you make bad decisions the potential side effect is bad circumstances. Things could have gone either way. I am glad thankful they never did.

I’m sure Jordan Jefferson’s parents and coaches told him to be careful just like my parents used to always tell me. When I was 20 years old I would say okay but when the night is calling and the adrenaline is rushing you hear what they are saying but it doesn’t always stick. I went to a few places I shouldn’t have and been around some people who could have put me in danger. Kids do that all the time it’s just that most of them are not the quarterback for a major college football program.

I feel bad for the kids involved especially for Jordan Jefferson because he paid so many dues to get to this point and have it all blow up on him because of a few minutes of bad judgment. I don’t know what actually happened yet. It really doesn’t matter at this point. His football career is ruined and if LSU loses to Oregon next week everyone is going to blame him. If the entire season falls apart some fans are going to talk like he’s a mass murderer instead of a kid that got into a fight and that’s unfortunate.

Times have changed in our society. You could be the starting quarterback for your college or the first person to do well and make it out of your neighborhood and there will be just as many people out to hate you as there are to love you. You have to stay clear of places where there is the potential to have altercations with people because you can’t control that environment.

That’s easy for me say now. I’m 37 year old dad with a career and an upstanding reputation. I’m so paranoid of something happening that I hardly hang out anymore because I am afraid of screwing everything up. When I was Jordan Jefferson and his teammates’ age I probably would have thought “All we have to do is go to the bar, meet some girls and have a few drinks without any trouble. We’ll be back in enough time to sleep a little before practice. No one is going to even know we left. What could possibly go wrong?” Ninety nine percent of the time that works. This story is the case of the one percent that it doesn’t work and you end up sitting on the sofa at your parent’s house watching television as some other guy leads your team out of the tunnel for the first game of your senior season. He should have just stayed in and went to sleep that night. I hope this makes him a better man as he gets older.

Some life lessons sting harder than others.

It is tragic that this happened and it is unfortunate that the price he has to pay is so steep but I hope this sends a message to the youth of today and let them know that, there are consequences to their actions and that their action can hinder their future.