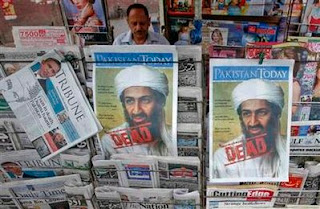 There are topics that I don’t like to discuss with people anymore because they are just too complicated. I don’t discuss religion anymore. I don’t discuss parenting with people as it relates to their own children. I don’t discuss Hurricane Katrina unless I know you were affected. Personal emotions make that situation hard for me to accept any opinion different than my own. That’s also the reason why I don’t discuss 9/11 with anyone. What happened on September 11, 2001 affected people in different ways and changed so many lives and families. From the victims of the terrorists, to the folks that got sick trying to rescue people, to all of the soldiers that have fought and sometimes died in the two wars that followed, I find it difficult to just shout my opinions all over the place without taking into account how some of these people and their families might feel.

Sunday night after the news broke that Osama Bin Laden was killed the reaction was crazy from all sides. There were some people ready to throw a parade and celebrate a great moment in American history. There were crowds singing and chanting USA outside in cities all over. Then there were the other people who felt disgusted with the taste for blood and actually felt sadness and reflection by Bin Laden’s death. We also have the other group of people who don’t believe he’s really dead, don’t believe he planned 9/11 and think President Obama is his cousin and set the whole thing up to keep planning his takeover of America. There might not be anyone that believes all three of those together but a lot of people fall into that group in some variation.
I can’t debate anyone about how they feel so all I can do is give my opinion.

When I heard Osama Bin Laden was killed I didn’t celebrate but I wasn’t upset either. His life and death was a situation that didn’t lend itself to many other options than how things ended. The country that wanted him to pay for what he did would never forgive its leader for trying to make peace with him. The president did what he had to do. Bin Laden was also in a position where he could never do anything but hide and use his status as America’s main enemy to keep his movement going. I don’t see how this could have ended any other way. At least now when the troops start coming home there might be a little closure to the original purpose of why they started fighting to being with. The crazy thing about the situation is that I just gave my personal opinion and I am not sure if I feel the right way about it. One thing I am certain of is that all of this could have been avoided if Osama and his boys didn’t decide to crash airplanes into buildings.
Posted by Clifton at 5/04/2011 09:00:00 AM

Unknown said...
This comment has been removed by the author.
Wednesday, May 04, 2011

Yeah the way the WWF handled it at Extreme Rules and RAW was pretty low-taste in my book. But then again it is professional wrestling.

The spring of 2011 is a crazy period of history, kinda cool to be living through it.

This is a very thoughtful post. I was glad about President Obama's decision to withhold the photographic evidence. thanks, sp

I haven't commented here in a while but this exactly captures my feelings.

I'm gratified Bin Lauden has been brought down, but no one should be celebrating the death of any human being. Sometimes it's necessary but that doesn't mean it's a reason for celebration.

Keep being right about important thing