There's A Lot of Water Coming 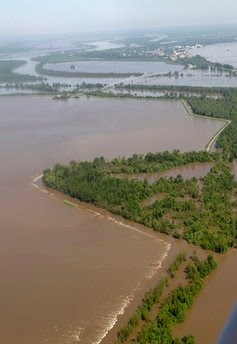 There’s a lot of water in the Mississippi River right now and it’s headed this way. People all along the river are evacuating and hoping for the best. I’m not reluctant to admit that the rising river scares me. It’s predicted to crest at 19.5 feet and that’s right up to the limit of our levee protection. I hate to bring this up but levees and my community don’t have the greatest history together. Of course this is different because the water isn’t being pushed along by 100 mile per hour winds and the energy of a hurricane but it still makes you worry a little. I keep hearing terms like blowing levees and levee breaches and it makes you think about the worst.

I am sure we will be okay and the Corps of Engineers has everything under control. I just wish I had more confidence in the entities that are supposed to protect us. I was joking with a friend the other day after the story came out that New Orleans was the second best city for jobs. We laughed because no one that we knew personally thought this could be true and the funny part is all the people who said they felt that way already had jobs themselves. We don’t have much faith in a lot of things working out in our favor and high on that list is the Army Corps of Engineers. I guess time will have to heal that wound. In the meantime I just hope not too many people get flooded out in cities along the river while it is cresting and that the levels go down quickly.
Posted by Clifton at 5/06/2011 08:49:00 AM