Repost: The New Face of Corruption and Watching For The Double Standard 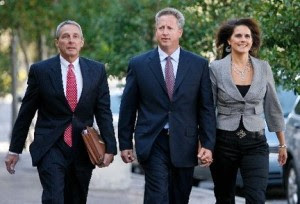 On November 6, 2009 I wrote a blog post about Greg Meffert and the new face of city corruption. Since the City Hall bribery trial of Mark St. Pierre started today I figured it was a good time to repost my feeling and get everybody back into the spirit of ending corruption.
Before you read these old words I want to say something about race, corruption and the perception of people. For a man that bribed his way to millions of tax payer dollars the picture of Mark St. Pierre in today’s paper is kind of small. He made money on the scale of Stan Pampy Barre and there was an entire section the Sunday paper dedicated to him when he went to trial. In the last few weeks there have been a few issues with members of our police force making money off of taxpayers with questionable business dealings concerning traffic camera tickets. Chief Serpas was trying to figure out a way to get out of the situation without throwing his friends under the bus. The mayor stepped in and suspended Commander Edward Hosli and the Director of Public Works Robert Mendoza.
From my vantage point the mayor had two reasons to do this. The first is he’s the leader of the city and the buck stops with him. He doesn’t have to sit around and wait for other people to act. He showed leadership in stepping in. The other reason is the thing that many people aren’t going to talk about. For the last few years of Mayor Nagin’s term the former Chief Warren Riley was treated down right horrible and had some nasty things said about him on radio, in blogs, and other platforms. Some of it was personal and out of bounds but it was okay because he worked for Mayor Nagin and the murder rate was high. I could only imagine if the traffic ticket hookup had been discovered under Chief Riley and the officers running it just so happen to be his close personal friends. People would have demanded he resign as well as all of his friends and any officers who were working for him.
These are the kind of things black people talk about among themselves but since we don’t control the media that angle doesn’t get covered. Mitch Landrieu knows that and that’s why saved the chief by stepping in. You can’t bring a city together with two sets of rules.

It doesn’t matter about the race or ethnicity of a person when news breaks of a corruption indictment in New Orleans. My reaction is always the same. I get sad because I think of what we could have done with whatever money or opportunity that was wasted to pull off whatever the scam was. Did we even need crime cameras in the first place? What could the Recreation Department have done with at least half of that money? I guess it’s too late to worry about that. I still think that any news story concerning crime that comes out of this city does damage because no one sees it as a clean up. Everyone sees it as a reminder of just how crooked we are. With that in mind, I feel like it’s time to go ahead and point out that the current face of corruption in New Orleans just so happens to be white.
I realize Nagin is the mayor and he is famous for making the Chocolate City comment that stirred up so much emotion. The fact of the matter is that when it comes to corruption and dealing under the table the city is more of a vanilla and chocolate swirl. Maybe this case will make corruption just a New Orleans issue instead of a black against white issue. Maybe this will make Jim Letten look fair because I happen to be one person that wants him to stay in office as a warning to potential hustlers. Maybe Mr. Meffert will turn over some evidence against the mayor and satisfy the blood thirsty mob that won’t sleep until they see him get arrested. Maybe he won’t because he doesn’t have anything and the only thing Mayor Nagin is guilty of is falling asleep at the wheel while his boy got paid. Whatever happens we need to look at this as tying up lose ends of the past so we can move forward.
Now, there is one thing that can bring the race card back into play. A 63 count indictment is nothing to sneeze at. Mr. Meffert and his wife got hundreds of thousands of dollars from this plan. I’m thinking that if Oliver Thomas has been in prison for since 2007 and serving 37 months for only 15,000, then if Greg Meffert is found guilty he has to at least get a sentence five times that amount. If Oliver Thomas does three years and Greg Meffert gets probation or any kind of soft treatment then I am going to pull out my race card and throw it on the table because that will be the right card to play in my opinion. I don’t think I will have to do that because I believe Mr. Letten is going to set an example with this case. That’s going to be a great thing if it can stop everyone from trying this kind of thing again.

Meffert has turned on is buds and testified.

Oliver stood up and didn't rat on his buds, after promising to do so, so he got spanked.

Meffert get's some consideration, Thomas gets out and a part in a local theater.

The equities of this are complicated and race is a small part of it.