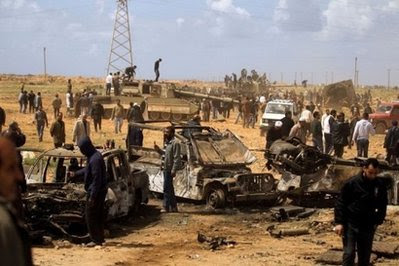 All Americans should have an opinion about war and military action. There are people in our armed forces from all walks of life and from every section of the country so it affects everybody. You don’t have to share it with anyone but I think it’s one of those topics everyone should think about. I don’t have a problem sharing my views. I think that if it’s a matter of national security then military action is a necessary evil and we need to do it. The problem in recent years is since information and truth has gotten so fuzzy it’s hard for me to determine what’s necessary and what’s not.

I don’t know if Libya was necessary. It seemed to me like they were having a civil war and some bad things were happening during the fighting. It’s not like Egypt where the majority of the country including the military seemed to put the people over leadership so army didn’t open fire on their own and create mass carnage. Libya seems to be a bit more complicated in that a lot of people still support Moammar Gadhafi. I could be wrong but that’s the way it looks to me. If I am wrong about the people I don’t think I am wrong about the military because they really shut the rebels down.

Now America is part of another coalition and is bombing Libya. The president says there will be no ground troops and I hope it stays that way. I don’t think it was a good idea to get involved in that country. I have two main issues. The first one is that Saddam Hussein was this evil dictator who harmed his own people like Gadhafi is doing right now. We removed Saddam from Iraq but the people of that country were so tribal and divided by religious sect that it took less than a year to whip Saddam’s army and then almost another ten years to try and get the people we freed not to kill us. We might be spending money to help Libya five years from now.

The second thing is whenever it’s a country that we have a vested interest in changing we always pull out the Protecting Innocent People card instead of just saying that we want the leader removed and get it over with. I don’t want to see innocent people get killed no matter what country they are in but innocent people have been getting killed in fighting all over the place especially in areas like Sudan and The Congo and we haven’t fired anything at anybody. It makes that argument look like we have no real reason to be doing what we are doing because it’s not consistent. The other thing part of that is how you know when those people are no longer in danger. If we stop the bombing tomorrow is Gadhafi just going to let bygones be bygones in those areas where the rebellion started? He’s not going to let it go so we can’t leave him in power and that means we are going to have to be involved in that country to make sure things go well. We might not have troops there but we will have to do something.

Regardless if you are for or against getting involved in Libya we should all agree that we will have to pay for something to keep this from blowing up in our faces. When it happens I am going to find it really sad that we got involved and financially invested in Libya’s business when we are supposed to be so financially strapped as a country that teachers are made to seem evil just for wanting good benefits.
Posted by Clifton at 3/22/2011 08:54:00 AM