Something Still Stinks to Me 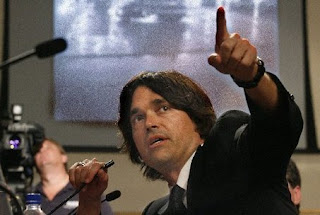 This SDT illegal dumping story has me very confused. Clay sent me this link to the story. Apparently this guy is trying to frame Sidney Torres and stole the truck. This would be easier for me to digest if the truck wasn’t being parked in St. Bernard Parish. This story goes against everything I have ever known about the St. Bernard Parish sheriff’s department. For the folks that are not familiar with the layout of let me give you a quick geography lesson. Bernard Parish neighbors the Lower Ninth Ward. I have spent lots of time in St. Bernard Parish during my life. Crabbing is one of my favorite pastimes and that’s where we go. There are good folks in Hopedale and Yscloskey. There are pretty sisters in Violet. We also did a lot of shopping and things in St. Bernard so I am not hating on the place. However, there is one thing that everyone who grew up in my area of knows and that is that when night fall comes the sheriffs department in St. Bernard does not play around especially with brothers who don’t live down there. I know a guy named Nat who was once driven to the city line and told never to step foot in Arabi again. This is the same area where my family was once pulled over in my dad’s van for riding through a residential neighborhood so they could look at Christmas lights during the holiday season. They didn’t get harassed or anything but the message was clear that there would be no foolishness going on.

Somehow this young black guy managed to go to a closed business, steal a truck (which the keys were conveniently left in along with an unlock gate and a full tank full of piss and shit) drive it out of the city, dump it, then drive it back to where he got it from and still manage to get in his ride and make it home. That means he got in and out of St. Bernard Parish doing illegal business after hours twice! Either Katrina has really changed the approach to crime in St. Bernard Parish or the guy who managed to pull this off should be sent to the to look for Bin Laden because he has a special gift. I am not saying Sidney Torres is lying. I’m saying it goes against everything I have ever known about the area this crime occurred. Something doesn’t seem right about this to me and I find it amazing how people can believe this so easily when they question every other explanation for every other incident that happens in this city.

Let me get this straight. The mayor can say that someone made a mistake and deleted his emails and he has to go to court and pay a fine because no one believes him but Sidney Torres can say that a disgruntled ex employee made his way to St. Bernard Parish to steal a truck from a million dollar company and get lucky enough to find the one with the keys in it and a tank full of waste. He then drove it through an unlock gate dumped it in the Ninth Ward and drove the truck back to the same spot and this makes logical sense? My logic must be really off because this explanation is not cutting it for me. At the least someone needs to explain why tanks of waste are sitting overnight so close to my house.

I'm glad you've put your finger on it, Cliff. Something wasn't right for me with this story, either. Perhaps we need to map out the supposed route the truck took from St Bernard to the dump site...oh, wait...the crime cameras in Orleans don't work.

Illegal waste dumps in residential neighborhoods and non-functioning tools to help prevent crime are indeed bigger than emails themselves. I think we'd probably need to have, say, Bobby Jindal having seen this truck out of the corner of his eye during his 60 Minutes interview when he was standing on the steps of an abandoned lot in the Lower Nine for it to be fully noticed at this point. Sad, really.

I agree with you something doesn't add up.

I can't figure out exactly what but is doesn't make a lot of sense, but then a lot of things here don't make much since and never have.

By The Way, According to Sidney, SDT has GPS tracking on the truck and could tell where it went.

I am totally with you on this. My first thoughts were that either Sidney is taking pages from James Lee Burke books or those Dave Robicheaux novels are really non-fiction.
This totally stinks and not of garbage or sewage.

Haha, you're so right on. I grew up in St B and a lot of the stories about the police there are true. I think the thing Sidney is getting at is that this guy may have been hired by someone (a competing company perhaps?) who wanted to have SDT kicked out of their contract (presumably so they could have the contract themselves?). It's all very mystery novel-ish, but I wouldn't be surprised if this were simply the rich, powerful, and corrupt playing a game with each other. If the theory holds than the guy who 'stole' the truck would have been provided everything he needed to do the job. Clearly, they are throwing him under the bus now. We shall see...

I have a friend who has contacts in City Hall. I trust him as we have worked together once before. He told me this last night-

The truck driver was not disgruntled or fired before the incident... Torres only fired him four hours after being discovered.

You are right-something is going on with SDT and City Hall.

It's inconceivable that a company as tech-savvy as SDT ("we can track our trucks with GPS!) does not have the kind of security system at its headquarters that would prevent this alleged break-in, or at best, be able to immediately identify whomever did this.

I'm not buying Sidney's story for a second.