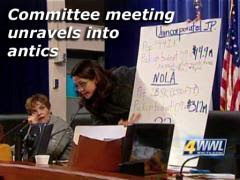 A common theme in the blogosphere is that black politicians play the race card to protect themselves from being accountable. I actually agree with that but I thought I would show how other people help the race card work. I know Mardi Gras is Tuesday and people are in party mode. I plan on having a good time too so let’s just leave this up here for the rest of the week so people can read it clearly after their hangovers are gone.

Two years ago when the old housing projects of were still standing there was a protest at the St. Bernard Housing Development in an effort to have it re-opened. During that march a guy named Garelle Smith was arrested. I wrote about right here. Garelle Smith is a guy who has been accused of several murders in the city but has never been convicted because no one will testify. His reputation and status of what’s wrong with the city is so bad that Soledad O’Brien made him a focal point of her special on . During the time of that march I wrote about how crazy it was for the people involved in that movement to have this guy involved in any way. If I didn’t know anyone personally like my mom, my nanny, god sister, Ms. Gladys and all them folks that lived in the St. Bernard project, I could see how someone would look at that story involving that guy and think to themselves “Why should we spend the money to help a bunch of murderers come back to the city?”. It doesn’t matter if you agree or disagree with the general topic. When a man like that becomes a part of the equation is alters the way people think. There could have been someone who believes in everyone’s right to return home reading that but their concerns for crime and safety made them uneasy about buying in. Criminal behavior has been used against the black community in this city to validate the horrible pace of recovery. It gives our detractors ammunition and we need to figure out how to fix that.

A few weeks ago we had some drama around the city’s sanitation contracts. I was online at my desk and came across the story of one of our council members Stacy Head’s protest at a committee meeting. The story was posted on wwltv.com. This is probably the most popular news channel in our area and I am sure people around the country visit this site to keep up with what is going on around the area. At the time of reading this article I was really trying to understand the facts and figures involved in this sanitation thing to see if there is some merit to what she is saying. The sanitation committee is headed by Councilwoman Cynthia Willard-Lewis. I don’t know what made me break the rule of not reading comments on news stories but there was a statement in one of the comments that went something like this:

“Why do black women hyphenate their names like it’s impressive? It’s not! Go get em Stacy.”

That’s almost the exact comment. I tried to get the actual quote but I can’t pull up the comments section on the story anymore. What in the hell does black women putting hyphens in their names have to do with a sanitation contract? How does a man who was raised by and is raising black women think clearly about this topic after reading that? See, when I read that my thinking shifts from a person trying to understand the cost of sanitation to a man who isn’t down with a sister getting disrespected. Instantly I am ready to protect Councilwoman’s Lewis’s honor and I am no longer paying attention to the bare facts of the issue like I should. I don’t always agree with the actions of Councilwoman Willard-Lewis but if she walks through my door right now she’s going to be Ms. Lewis and she’s at the age where I would probably answer everything she says with yes ma’am. Regardless of whether or not someone thinks she’s doing a good job, her respect is non-negotiable. That sad part is that this one is mild in comparison to some of the other things said online and on the radio. I can’t sign on to any movement that’s going to tolerate her disrespect. Just like the story involving Garelle Smith affected people’s concerns about rebuilding public housing; personal attacks on black leaders in this city that have nothing to do with business affects me. In the same way I could understand how someone would think re-opening the St. Bernard Projects would be bringing murderers back into the city, I can understand how a black person could read a comment like the one I did and start feeling that the news media, Councilwoman Head and anyone who supports her side is racist. I don’t know any of those people personally to make that kind of accusation against them but if no one connected with that side of the issue isn’t going to say anything then you leave people open to make their own assumptions and that’s when problems start.

If I was leading the movement to re-open the projects I would have been trying everything I could to distance us from the thugs like Garelle Smith. If I was a member of the local media, or one of the council people involved, or even a concern citizen who really means well, I would be doing everything I could to make sure the people who represent the majority of my city understood that the statements like this do not reflect my integrity or my agenda when I present a story or protest involving certain officials. Saying nothing about things like this has the same effect as the people who don't say anything about crime. It gives your detractors ammunition to throw that race card and have it stick with enough people to weaken your good government agenda. All the people who claim they just want good government for everyone need to figure out a way to fix that or the race card is going to be your downfall even if you get the changes you want.