Cliff's Opinion on The Stimulus Package 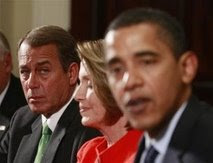 I have been listening to people talk about this stimulus bill all week and I am even more convinced that most politicians and news people covering the story have no idea how real American families live. If they did this stimulus could have been passed ten days ago. Politicians are already posturing for the 2010 elections. I also have figured out that too many Americans don’t understand how other people live either because if we did then none of this argument would make sense if we are talking about stimulating the economy. There has to be different strategies for different people if the thing is going to work. I have lived on different sides of this problem so let me break it down.

When you have a good job and own a home, you can purchase just about anything in this country on credit. Sure, people are having trouble paying their house notes but no one is mentioning the student loans, the furniture bills, the big plasma TV bill and all that other stuff in their possession they are still paying on too. Those are the bills that really make you feel the pinch. That means that if you just give them a tax cut and they get a few more dollars on their paycheck, their first priority is going to be stopping all those phone calls from collectors. They don’t need to go shopping. They need to pay for the stuff they already purchased when things were going well. If you want to help them you have to give them enough relief to pay off that debt so the house payments won’t be so difficult. That way they won’t be foreclosed on. If you don’t feel comfortable sending out checks then come up with a way these families can fill out something listing the account numbers of accounts they need to pay off within whatever limit we set and let the government send the money directly to the creditors themselves. Wouldn’t this help the banks too? I don’t need to see the money if you can get Visa and Master Card off my back. That’s a winning solution for everyone involved.

Now let’s take poor people’s situation. I have been a member of the working poor. I am not that far from it now. Unlike the middle class, when you are poor and working, you don’t buy anything other than necessities because it’s hard to get credit and you can never save enough money to make big purchases. Trust me when I tell you that if you go to your bank for a loan and don’t make a lot of money, those folks won’t even take the courtesy to call you back to tell you no. So, since the middle class already has the things they want and will surely not be going on a shopping spree with any extra money, you have to give some money to the working poor because they will actually spend 90% of it and stimulate business. Talk show host and political pundits need to stop saying this is a redistribution of wealth to play to their base. A few hundred dollars is not going to make a poor family wealthy. They are going to take that money and get their car fixed, or buy some new bedroom furniture for the kids. They might go on a shopping spree but it’s the only one they are going to go on for a long time. Why do you think most poor people run out to file their tax returns the minute they receive their W-2? They need the money to buy all the things they couldn’t throughout the year. Earned income credit doesn't make people rich. It makes people like Wal Mart and Sears rich. Think of all the jobs that will be saved because there will have to be people working somewhere to serve them. That’s a winning solution for everyone involved too. It would help the cities and the states because they would get the sales tax revenue.

As far as the banks and corporate is concerned, they don’t need anything because we still have half of the financial bailout remaining. My question is why it seems like there is not one person in the media or in politics that can explain the situation from both angles like this without making one group the enemy of the other one. In my opinion, this should be the foundation for the entire stimulus. No disrespect to President Obama and the rest of our esteemed political leaders but I don’t see how an 800 billion dollar stimulus is going to work without at least half of that going directly to the people.

You're right. They don't get it. Besides the pundits are making more than I'll see in five years of my work. They have no clue what our car payment does to us some months! We're not poor, but we sure aren't rich, and yes, we'll be spending our refund (if we get one, haven't in years) to pay some bills.