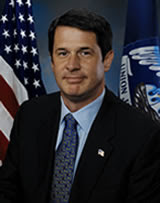 David Vitter is next up to bat on the political letdown tour. Every time we get a politician moving up the ladder they do something crazy. Bob Livingston was going to be speaker of the house but freaky on St. Charles St. William Jefferson is running around making deals with Nigerians. He must be the only person that opens those spam emails. Now we have David Vitter running around working his tool all over the place. I'm telling you right now, if I go to She She's one night and Mary Landrieu is in the back giving Bobby Jindal a lap dance I am moving and never coming back. At least Vitter's supporters aren't running around starting coalitions in his defense like Bill Jefferson's people. How many girls has he actually slept with? Every day since the first story some other woman is going out saying she got a piece. David Vitter is a freak. This is why I can never run for office. If you have some skeletons you need to stay behind the scenes. You have to love Louisiana politics. If Edwin Edwards were free all these brothel and the brothel owners would disappear.