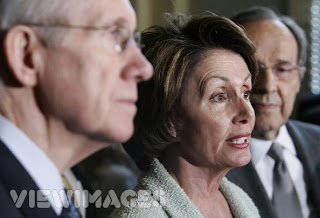 Democrats are players. I was not a political science major but I have been following politics since I was ten years old. Usually when you win an election one or two things have happened. Your base is very inspired by you or your opponent has done such a shitty job that there was no way you could lose. All these things were true in 2006 when the Democrats took back the Senate and the House. Americans were so fed up with George Bush and the war that they put Nancy Pelosi and the Democrats back in office thinking the cavalry was coming to put an end to the whole thing. They all took office and talked allot of trash. I thought it was funny that besides firing Donald Rumsfeld, George Bush really didn’t change a thing. Now I understand why. He knew these punk ass Democrats were going to end up folding under the pressure to actually do something and give him the money he wanted. That’s exactly what they did. They gave him the money with an exit date, a vague time line, or anything else. Basically, the base of their party just got played. Now, you have given George some confidence and that’s a dangerous thing. He and Cheney might bomb Venezuela tomorrow.
You know what the cool thing is about being a Republican? No matter how foolish, ignorant or dangerous your views are, if you wait long enough someone in leadership will come out and validate your opinion. If a few million voters think that aliens are the cause for homosexuality, some Republican senator will eventually come along and try to pass a bill to ban all alien contact and fund new satellites to monitor for XP 1200 space modulators. Democrats on the other hand spend day after day complaining about everything the Republicans have messed up. Then they turn around and go along with the same shit and confuse their base. Sooner or later they will have to win based on something they have done instead of something the other guys have done wrong. This is why Mitt Romney will be the first Mormon president in U.S. history. He will beat Hillary Clinton after she can’t justify how her party promised to get the troops home and they are still there playing referee.