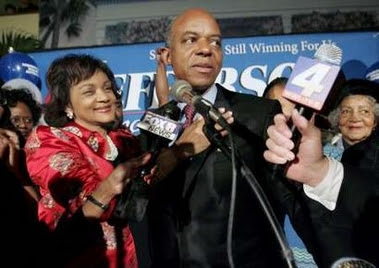 It appears that not enough people in the New Orleans Metro area are reading my blog. William Jefferson won in a landslide destroying Karen Carter thanks to the influence of irresponsible community leaders, low turnout and Harry Lee. There are two things to take away from this race.

The first thing is that there is hardly anything a black public figure can do to lose any public credibility. I don't know if he is guilty or not but Congressman Jefferson did have 90K of government money in his freezer. We now live in a city that has re-elected a man under investigation for congress, and a mayor that everyone laughs at. Yet, it's everyone else fault that our recovery is going so slowly. I personally thought that he should have stepped down and not ran again. I also don't think any local officials should have supported him. We already know that Nancy Pelosi and the new leadership in Congress is not going anywhere near him. That means it was selfish and for his own gain. It's kind of like when he came back during the flood, went to the crib in his own military truck to get some "paperwork".

The most important thing is that the numbers from this election prove why this area will always be a joke. Look at the numbers from Jefferson Parish. I know the people in Jefferson Parish don't like the fact that they look racist to the rest of the country after the Spike Lee movie. They may not be racist as much as they are stupid. There isn't a thriving major city in the country whose suburbs think they can function without the use of the big city. Nobody moves to Dallas and actually live in Dallas. They live in Irvin, Cedar Hill, Carrollton and places like that. They might not live in Dallas but they know what name drives the whole area. The New Orleans area is one place where people in the surrounding cities could care less what happens in it. They want to drive into work, make their money and fill the hotels so we can send the taxes to Baton Rouge, but damn if a few people try to cross the bridge to get to dry land(how come no one ever mentions that the first part of the Westbank is actually Orleans Parish?). What if we fired shots at everybody who came here during the day to work downtown? Now, these same people including their crazy sheriff chose to vote for a candidate knowing he will either get indicted or have absolutely no power in Washington just to get back at Karen Carter. Basically, the people of Jefferson sold the city out for a personal vendetta. Jefferson and Nagin together is like political suicide for the most part. They don't care what Jefferson does in DC because most of their houses are dry and their families are not split. Their side of the levee didn't fall. This is why the people that live in the New Orleans city limits cannot be tricked into buying into that regional approach bullshit. The regional approach is going to end up just like the levee system, public schools and every other thing. In the end the people living in the city will get the short end of the stick.

Yeah, you right! I'm still in shock. I can't pick up the paper or watch the news yet. I need to keep my head in the sand a few days more.