Things I Thought About While Driving 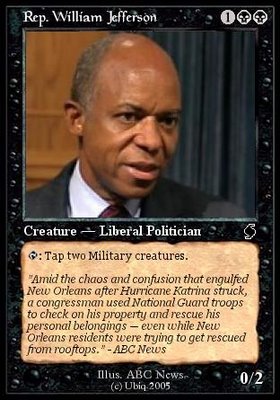 Let me get this straight. When Nelly had the Tip Drill video on BET Uncut, sisters all over America was staging boycotts against his shows and writing BET to the point where I think they decided to go ahead and cancel the whole show. How could those sisters shaking their bodies be worse than Flavor of Love, a show that almost every black woman loves? Were those 3 or 4 minutes of video more damaging than 30 minutes every week of watching women throw themselves at Flav's ass just to be on TV? Al Sharpton protests the Boondocks and not this garbage? I need to know where the movement is to get this off the air. We won't even get into College Hill and what that has done.

I can’t believe William Jefferson is down here running for Congress again. I am tired of voting for black politicians just because they are black and Democrat. If George Bush weren’t a lying, election stealing, useless war-making president and most Republicans weren’t mindless clones that just go along with whatever they hear on TV, I would vote Republican just to make a statement. My city has had black democrats in charge for the last 30 years and shit has gotten worse. That's because we are enamored with the fact this person is smart and educated enough to actually run for office and not what they are going to actually do once they get in there. It makes total sense when you think about it. Black people are the only group in the country that values how much we can get and how far away we can move from our neighborhoods over anything else. That's our interpretation of the American dream. It’s the way we show we have “overcome”. It's only right that we would vote for inept politicians that used to live in our community even though he or she probably couldn't name three people there now. It’s style and presentation over substance every time. Nobody knows this more than black politicians and that’s why they don’t do anything. We are conditioned to vote for them. Ask Ray Nagin.

Finally, I read all the time about the crisis of black men. That is very real. There are a lot of brothers in trouble. Young cats are staying out all night, shooting, dying, fighting and selling drugs with no respect or concern for anything. It's a vicious cycle. In order for it to be a cycle, the people involved have to reproduce. So who's having all these crazy thugs' kids? I hope in our focus to find out what's wrong with the brothers we don't lose track of the fact there are allot of sisters who live the same kind of life. If they don't live it, they at least endorse it through their affection. I'm not trying to blame them. It’s all part of the same game. I'm just saying that if deep in the hood the valedictorian in school was a brother, and he had the five finest women in his class fighting over him because of how well he reads, every guy in the neighborhood would at least go to class and try to learn something. You have to attack a problem this big from all angles at the same time.

I am a die-hard Saints fan but I have to point out the following: We are going to have a football game Monday and still don't have a public hospital open in the city. I don’t know if I should be excited, sad, or embarrassed.

Hi. I randomly came across your blog and I'm glad I did. I find your commentary to be insightful to say the least.