100 More Days and Still No Plan 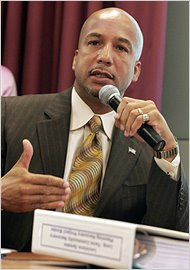 I know for a fact there are some people from New Orleans that read this blog. Since some of you are not home yet I am going to start out this blog out with something positive. I can honestly say that there are signs of progress everywhere in the city. Even the Lower Ninth Ward has a few signs of life. Everyday there seems to be more people on the streets than the day before. The only problem with this is that no one in city government can take credit for any of it. Mayor Nagin presented his “100 Day Plan” review yesterday and I have to say I was very under whelmed with it. His major achievements were water pressure, trash pickup, and more plans to come up with plans. That seems to be his second favorite thing to do next to free vacations around the world. If this was his first 100 days being mayor or 100 days after the storm I would be willing to jump on that progress train with him. Unfortunately he’s been in charge the entire time so that makes this whole 100 day presentation a joke in my eyes. What’s even sadder and disheartening is that all the major players on the committee were the people running against him during the election so that means they obviously wouldn’t have done a much better job either. The time for planning to make other plans has got to stop. We need to know something. At this point, I will accept a bad idea as long as it has some details to it. How can we be mad about the lack of federal funding when we don’t even know what the hell we are going to spend it on? It might actually be more frustrating to have the money to fix certain things and still see it not done. It’s my fault for being naïve. When George Bush said he would do all he could to help rebuild the city, I thought for sure there was going to be a week long meeting by city leaders to at least come up with a blueprint and ballpark figure. It shouldn’t have been that difficult to know what to ask for. Katrina messed up allot of things but the infrastructure in New Orleans was not great to begin with. This is the city of a lot of old things. I refuse to believe that the mayor and city council didn’t already have certain things they wanted to do around here before Katrina. Now, you have the opportunity to name what you want and I haven’t heard a thing. That tells me that no one planned on doing anything before the storm and they are not equipped to handle what has taken place after it. The only thing left for me to say is that its going to be a damn shame when I move back into my house within the next two months and there is no grocery store, park, school, or pharmacy within walking distance. The inconvience alone makes you want to pack up and roll out of here but I’m not. Leaving only gives them the excuse for being incompetent.
Posted by Clifton at 9/13/2006 06:57:00 PM