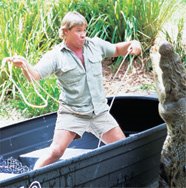 I was listening to the radio this morning on the way to work and there was all kind of joking going on about the Crocodile Hunter. I will admit that getting stung by a stingray is not a common way to die. Steve did some crazy things with deadly animals so no one is surprised this happened. I still can't believe he sat in that boat surrounded by the hippos or lay in the tree with all the komodo dragons. Regardless of how he died, I have a large amount of envy for the Crocodile Hunter. There are three reasons why.

1. Here is a man that loved what he did to the point he was willing to risk his life to save animals that would have eaten him in a second. How many people in this world have that much passion and affection for any creature including humans?

2. Secondly, he died at 44 years of age. I plan on living pass my 44th birthday but I am pretty sure that with all the places he's seen and cool things he got to do that he has pretty much out lived half the population in a short amount of time. The man swam in the ocean with a pool of sharks with nothing but his khakis short set. There is no strip club road trip to beat that.

3. Third, he may have been a little crazy and kind of funny, but he had the biggest set of balls of any man on the planet bar none! There is nobody reading this that would have went to Africa and got spit on by a cobra or sat in a canoe surrounding by hippos. Who knows the number of times he had to jump on top of a crocodile's back. Not even my grandpa would have done that and he was the baddest SOB I ever met.