The Next Step After Justice for Trayvon 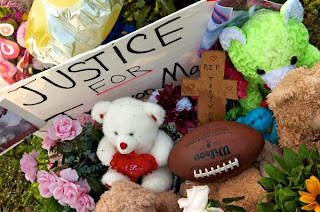 We live in a complicated world. Because it’s so complicated incidents can get lumped together under common issues when they don’t have to be. Sometimes no one is wrong in how they look at something but because we are trying to handle everything together it causes debate where there shouldn’t be any. With that in mind I just want to say that the crusade to bring Trayvon Martin’s killer to justice is a valid cause. There’s no gray area to me.

Even if there was a group of kids committing crimes in that neighborhood it wouldn’t matter because Trayvon Martin wasn’t one of them. As a matter of fact even if he was he still shouldn’t have died that night. That’s why we have law enforcement and a justice system. I know there are times when someone feels threatened or their life is in danger and they must take action but that’s not what happened here. There’s not one shred of evidence to suggest there’s even a doubt that this young man was killed for no other reason than being profiled by a man who was dying to be a vigilante. That is totally unacceptable because I don’t have time to be wondering what someone is looking at when they see me in their neighborhood. I don’t want to be visiting a friend and end up in the morgue because I decided to wear jeans and a hoodie that day.

That’s the reason why I’m 100% behind George Zimmerman being arrested and prosecuted. It’s personal to me because I was Trayvon at a point in my life. I’ve been followed in stores. I’ve been pulled over by law enforcement just to ask me where I was going. I’ve been stopped with my friends while we were just walking up the street. The part that makes it difficult is that even after I made good grades, went to school, and got a job I was still profiled the same way. Any of us could have been Trayvon. That’s why it upsets me so much.

I’m upset but I don’t have blinders on. I see what’s going on in my community and I know that black men have a serious problem with criminal activity and how we treat one another. I don’t think there is no way to justify what George Zimmerman did but it’s frustrating to know that some young men give his supporters the evidence to validate his crime. I know there are a lot of kids running for help and it’s not from anyone that looks like Zimmerman. They are running from young men that look just like them. That problem is our Achilles Heel because it gives people who hate us reasons to question our humanity.

That’s why I am hoping that once the initial goal of justice being served in Trayvon’s case we take that same energy, turn it inward and figure out how to save his peers from the cemetery and the penitentiary. I know it’s been difficult for us to deal with our own issues but if we can’t find the energy now after a situation like this I don’t know when the time will come. A young man is dead because of his appearance and I can’t think of a better way to honor his memory by doing all we can to make sure that many of his peers live as long and productive lives as possible.

There’s been a lot of talk about race lately. If brothers really want to strike fear in the hearts of real racists they need to see us showing each other love and respect. They need see us taking care of our kids and respecting our women. They need to see us as we educate ourselves and improve our community. I have no doubt we could do this if we just stay focused. After you march for Trayvon Martin, put those hoodies back on and let’s try to save these kids.
Posted by Clifton at 3/22/2012 10:16:00 PM

I couldn't have put it any better Cliff!!! It pains me to know the same thing happens right hear in our city too often and just recently one was killed in what was called an attempt to serve a search warrant. I LOVE my black men and pray often for us. Having eleven brothers gave me an up close and personal relationship with racial profiling, being followed in stores, and more. I've often said that justice is only blind when it doesn't involve us.