Sorry Al and Jesse: Make Noise If You Want To 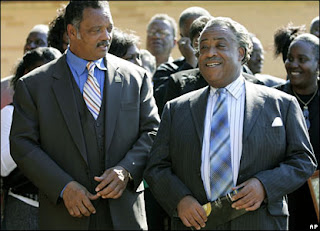 Time and circumstances has a way of changing your opinion about people. There was a time not too long ago when black people in my generation shook their heads at people like Al Sharpton and Jesse Jackson. They always seem to be raising hell for petty issues and playing the race card when we were trying to move past that. The things they were yelling and screaming about and that old school stuff like marching and having rallies couldn’t get anything done. They were just embarrassing everybody and playing self appointed black leader.

Then President Obama came along. He’s elegant, always talks in a distinguished tone, and he always sounds like he knows what he’s talking about. As far as image and conduct goes he’s the black community’s dream. The closer he got to the White House, the more we wanted all the bootleg leaders to shut up and get out of the way. Poor Tavis Smiley has been trying to organize people for years. He said one critical thing about Obama and we sent him to an island somewhere. President Obama was the symbol that we didn’t need that kind of illegitimate, sensationalized, self appointed spokesman anymore. We were trying to get to the mainstream and they never give those kinds of people much weight when it comes to public opinion.

That was all fine and dandy until after the inauguration. I should have known something was up when Sarah Palin got as far as she did even after admitting she doesn’t even read magazines or newspapers. We got Joe the Plumber making speeches and appearances on behalf of a political party. Glenn Beck’s crazy ass got to go on the highest rated news network every night and say some of the craziest things about the president and all kinds of other people. He got so much attention and credibility that he actually had a rally in DC and thousands showed up. As crazy as people think he might be you have to admit that he had a lot of impact for two solid years. Bill O’Reilly is less over the top but his rhetoric is just as crazy most of the time and the president gave him an interview on Super Bowl Sunday. You can’t get more legitimate than that. Now the final straw is here as Donald Trump is questioning the president’s citizenship and thinking of running for office. I saw a poll this morning on Morning Joe that made him the favorite among Tea Party voters. He was at 20% and Sarah Palin was only at 12%. If she decides to run for president, what kind of foolishness is she going to have to say or do to compete with Trump and win those people back? We are headed downhill fast.

I want to apologize to Reverend Al, Jesse Jackson and anyone else who got caught up in the 2008 election fever. Apparently we had no idea just how much of the general population was willing to embrace lunacy. If Donald Trump can question the citizenship of the president and have anyone outside of his wife and children give thought to him running the country then Reverend Sharpton and people like him can do and say what they want to do. We may not always agree with their style but at least most of the time they have a legitimate complaint.
Posted by Clifton at 4/07/2011 03:01:00 PM