The Machine is Powerful 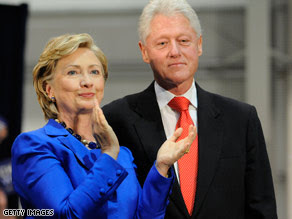 I thought these people lost the election.

The Clintons and their old soldiers are making out pretty well in this election. When you take that into account along with Robert Gates staying on as Secretary of Defense and Joe Lieberman not walking the plank, I guess when the president-elect was talking about change he meant only him.

I don't know about this whole SoS thing, but I know that Rahm Emanuel has paid his dues, has Chicago ties and is a consumate DC insider/fixer.

Who was it (and it wasn't Doris Kearnes) who said keep your friends close and your enemies closer?

My first reaction was similar to yours. But if I've learned anything during his flawless campaign, it's that Obama knows what the hell he's doing. He realizes that he's not going to be able to get anything done (and may very well get himself killed) if he doesn't build bridges to these folks.

True dat, ACT. I think Obama's reaching all over the place for both the doers; the folks whom he knows can get things done, as well as for the folks that will appease the crybabies.

I just want to say that our collective silence will only oil the chains of our subjugation...just because a biracial was given the keys to the big house doesn not mean that black people have a new America.

Let's not get it twisted...