The Return of Jeremiah 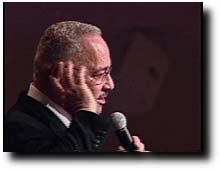 I told someone I wasn’t going to write about this Obama/Jeremiah Wright thing. I got something else on my mind more serious than that. I was prepared to let it go but after watching a few hours of news shows I have to get a few things off my chest.

First off let me say I am not really into this presidential race anymore until the primary is over because I am tired of hearing the same old thing. I can say this however; this whole Jeremiah Wright thing is ridiculous to me. I am not Obama’s speech writer. If I was at the moment I would simply say the following. Anyone who judges my whole agenda based on something my pastor says is racist. If you want to know why I think it’s racist I will tell you why. The whole premise behind the Reverend Wright story is that because Barak Obama went to his church he automatically believes and follows the same agenda as Reverend Wright like he’s some kind of clone in a cult even though he has said repeatedly that he denounces the statements that keep getting played over and over again. If you want to accept that then fine.

Hillary Clinton has been married to Bill Clinton for almost her entire life. To me that is a closer relationship than Obama and Reverend Wright have. Bill Clinton had oral sex performed on him in the White House during work hours. By the same standards you are holding Barak Obama to for Reverend Wright, I can assume that if Hillary wins the nomination and becomes president, some young male intern will be under her desk a few times a week. Doesn’t that sound stupid to you? Of course it sounds stupid. It sounds stupid because no one is judging Hillary solely on the actions of her life partner yet Barak Obama is getting judged based on a man that’s not even his blood relative. That’s a double standard and I know he can’t say it because that kind of truth will only piss off certain people more.

Now that I have out of the way I want to address Mr. Obama’s approach to this whole thing. Although I have no bigger heroes in life than my dad and my grandfather, I realize that I live in a different time with different circumstances and I am around a different and diverse group of people. I have the same core principles of how to behave but there is no way I could have the exact same outlook as my grandfather who went through The Great Depression, World War II and Jim Crow or my dad who went to Vietnam and grew up in the South through the Civil Rights Movement.

I like to think of myself as the evolution of the Harris man. I would hope my teenage brother or one of my nephews or my son would evolve in thinking beyond where I am. I can understand how Barak Obama can have aspects of his life that were guided by Reverend Wright’s council but not see the world the exact same way. However, I would never ever denounce or apologize for anything those men said out of respect for what they went through in life. That‘s why Reverend Wright came back. This is not about Obama. This is about people trying to minimize his life and years of service to his community. Most older black men base their attitudes about people and life on things they seen or went through. Most of them keep that agenda and it’s probably because they look around and don’t really see a big difference in their eyes.

I may not have the same vision or approach but I respect theirs because I know how they got it. You may not believe this but if I was on the job interview of a lifetime and someone pulled out a tape of my daddy or a man in my life I respected on that level that sounded angry and asked me to denounce it my response would be “well, I guess he was angry that day” then I would get up and leave. No job is worth minimizing the life and struggles of your people, not even the presidency. If it wasn’t for the strength to get through those struggles then we wouldn’t be at this moment with Obama having a chance to win. Plus, I don’t know what hood you drive through or live in but most of the stuff Reverend Wright talks about are very current events. I know some people won’t agree with me and that’s fine. If calling your grandmother and grandfather angry and delusional gets you a promotion then go for it. I’m not doing it and neither should Barak. He shouldn’t have to because he’s an American and if he is the most qualified then he shouldn’t have to get rid of everyone in his life that white America isn’t comfortable with to win.

If Hillary doesn’t have to hold a press conference to promise she will never get a young intern to fool around with at her desk then Barak shouldn’t have to keep reassuring everyone he loves America every other day.
Posted by Clifton at 4/28/2008 11:18:00 PM

I've been stuck in seeing all of this through the institutional racism lens (e.g., how come white people never have to explain themselves?) The stuff you bring up on the individual and generational levels makes so much sense, and hits closer to home than some sociological theory of race.

On a more immediate level, I'm SOOOOO fed up with this garbage! I feel you; I don't even want to discuss it. But then I hear this voice in my head saying, we can't get tired now.

They had Obama's denial and denouncement of Wright all over CNN at the Mickey D's yesterday. It is absolutely disgusting that this country professes to be keeping church and state separate, yet candidates will still be raked over the coals for their religious persuasions.

You raise many, many other important points, Cliff, and I'm damn glad you're doing it. I'm gonna bring a universal remote the next time I head to McDonald's and switch their tube from CNN to something like Animal Planet. It would certainly make much more sense in this current political climate to do so. Ugh.

A curious factoid was pointed out yesterday. One of Wright's speaking engagments was directed by a Hillary Clinton supporter.

I've been burnt out on this for quite some time, and won't be dealing with it until the nominee is selected. I will say that Obama is damned if he do and damned if he don't.

what bothers me most about this is that Sen. Obama bought into the mentality that says he had to do this. I know that politics will never be with out politicin', but this brother is suppose to be about changing the system. I for one am sick and tired of brothers and sisters bowing to "main stream America". I would have donated to the campaign if he had came out to say... " why isn't Jon McCcain here answering questions about Rev. Hagee?".