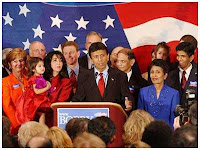 Bobby Jindal is the governor-elect of after getting a majority vote in the first primary. That is truly remarkable in this state. It’s easy to explain. First, Kathleen Blanco and the Democrats let their main voting block sit around waiting for help after the levees broke and watched them drive out of the state. For that alone they deserved to lose. Second, all the closet prejudice people that didn’t vote for him the last time did so this time as a way of apologizing for making such a big mistake. This race was over in August 2005. I’m going to be optimistic about Bobby. I did vote for him the first time since he was clearly the better candidate. This time around I had to go with Walter Boasso because we shared the same flood water and there is no way his policies wouldn’t have helped me. A few years from now everyone is going to be really glad that they corrected the mistake from 2003 or feel really stupid about being misled by another politician using big words but having little action.

Hey Bobby, with such an impressive victory for the Republican Party, wouldn’t now be a good time to go to the White House and get George to send us a few billion dollars to make up that Road Home short fall? The plan was flawed, full of red tape and Blanco designed it in a way that showed a lack of trust in her own citizens but the positive effects of it are visible.

I'm with you--I'm going to give him a fair chance to screw everything up before I condemn him for being the right-wing, unintelligent design freak that he is.

LOL!!! i dont know Bobby like that, but i agree what cliff said about Blanco.