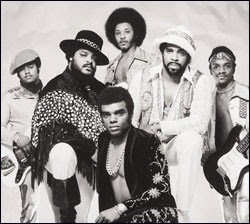 Fight the Power by the Isley Brothers

First of all let me say that I think Ron Isley is old enough and has had money long enough to know that he needs to pay his taxes. There is no excuse for him not taking care of that for years. This is another example of someone creating a reason to be a target. With that being said, why does he have to go to jail when it’s obvious he can earn enough money to pay this back? Why is it so acceptable to cage a brother for everything? The way I see it is that Scooter Libby helped our president’s administration exposed a CIA agent. He was found guilty and had his sentenced commuted almost immediately. The attorney general of the country gets in front of Congress to lie every week and gets to keep his job. Spoiled actresses get high and drunk and drive recklessly through the streets of putting innocent people in danger and everybody thinks that’s cute. I am sure we can get Ron Isley a payment plan for these taxes. I will even buy the Harvest for the World album again if the proceeds will go towards his bill. I bet Tony Bennett wouldn’t have to go to prison.

Am I the only one that thinks it’s kind of strange to ask George Bush to pardon Ron Isley when none of us voted for him and most of us hate on the black woman he promoted to the highest position a sister has ever had? See, you dog Condoleezza but I am hoping she’s listening to Footsteps in the Dark when she gets home for Ron’s sake.

LOL you funny Cliff. you KNOW condi ain't listen to no Isley Brothers. she look more like an undercover Barry White kinda chick.