When the Games are Over 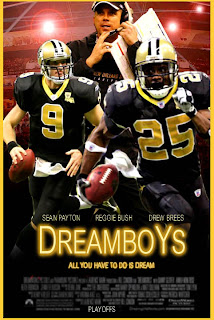 I've been a Saints fan since I was old enough to know what football was. I'm talking about back in the days where everybody thought it was cool to laugh at the team. All my life I have been waiting for the Saints to go to the Super bowl. I figured if we just kept at it that eventually we would have a team good enough to get to the big game and all my years of pain and suffering would be rewarded.

Then Katrina happened. Ever since then I have been bombarded with images and stories from national and local media that somehow make it seem like it was my community's fault that things happened the way they did. I have also been shown that there isn't anyone in a big hurry to help us get our lives back together. There have been thousands of hard working African American residents that have came home, went back to work and spent their own money trying to put things back together. What do we get for our trouble? We get bad services, no assistance, and blamed for our leaders own ineptness whenever a few bad seeds do something wrong. It's the kind of environment that makes everyone I know sit around and wonder out loud if it was the right thing to come back here in the first place.

Tomorrow the Saints will play the Eagles. I will be rooting for the Saints the same way I have since 1979. I would like to thank Drew Brees, Deuce, Reggie Bush, Sean Payton and all the other coaches and players for doing so well this year that I actually got caught up in everything long enough to forget what the real deal was. Unfortunately, they did such a good job that they earned a bye week. In the two weeks since their last game I have been knocked back to reality enough to remember that no matter what happens during the playoffs when it’s all over we will go back to the usual. The schools will still be messed up. The Road Home program will still be jerking people around. The mayor will only show his face in public after the citizens he really cares about (the business community) gets upset. Every surrounding parish will show through their comments and actions why we had to wait for cities in an entirely different state to take us in from danger. Then in the summer, some teenager will shoot someone and our governor will say that's the reason nothing's been done since September of 2005 except for fixing where the Saints play.

I was an obsessed Saints fan for 25 years. I'm certain there are only a handful of people that know more about the team than I do. My daddy told me that one day I wouldn't care as much. I knew that would be when we held up the Lombardi trophy as Super bowl champs and all my crying and fussing would be vindicated. I was wrong. Katrina did it on August 29, 2005. I'm just a little too conscious, my neighborhood is a little too empty and I have to drive a little too far for groceries and health care for the Saints to make it all better. It's going to be so funny the week after the season is finally over and Tom Benson starts talking about leaving again.