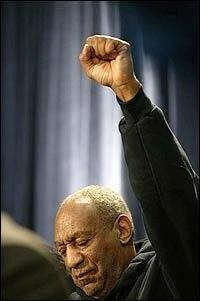 Today's blog is dedicated to Mr. William H. Cosby. Mr. Cosby was here in the city again yesterday at John McDonough High School to speak out against the conditions in the Recovery School District (which is a racist joke). He was here to speak on behalf of the students and call out the state to do more to change these conditions. That's damn shame that our mayor lives right here and doesn't say a damn thing about the schools.

You can have your opinion about some of the statements Bill Cosby has made about the state of the black community. There are many black people that were offended and took his comments personal. I have to keep it real. Since Katrina, Bill Cosby has been here many times to speak for the people and it wasn't a symbolic anniversary and he didn't have anything to promote. Where are all the rest of the greater than thou negroes who like to talk shit? How come when I go to the Lower Ninth Ward I see young white kids from all over the country cleaning out these poor black people's houses and not the Rainbow Coalition? Say what you want about Bill Cosby but at least he shows up and puts his time and money where his mouth his. I guess we will see the rest of them on the 29th when it's time to sign and remind everybody of how messed up it was or when they are campaigning for something.